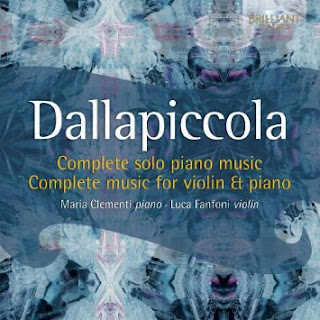 I have come to realize that I have not been exposed enough to the music of Luigi Dallapiccola (1904-1975). He was one of Italy's most original voices in the 20th century. I have been listening to the very captivating release Complete Music for Solo Piano & Violin and Piano (Brilliant Classics 94967), all nicely presented on one CD volume by pianist Maria Clementi and violinist Luca Fanfoni.

They cover the period 1942-1956 and so take the middle ground in his compositional development. They all show a melodic inventiveness and a serious demeanor, but also in the earlier works a sort of playfulness I honestly did not expect to hear from the composer.

We begin with "Tre episodi from Marcia," based on his ballet by that name originally written in 1942-3. The transcription for piano was put together by Dallapiccola in 1947.

The "Sonata canonica after Paganini" (1943) shares with "Tre episoda" a kind of bright exuberance, and a tonally grounded centrality, but in this case makes use of Paganini themes, somewhat well disguised until the final bars.

With "Due studi" (1946-7) for violin and piano we get more of a tonally expanded, modernist Dallapiccola, dramatic, gestural and brilliant in an essentialistically terse manner.

"Quaderna musicale di Annalibera" (1952) for solo piano is dedicated to his daughter. Eleven studies feature cannons and 12-tone structures for a musically moving modern approach that is the Dallapiccola most of us know better than the earlier incarnations. It is complex, refective and especially well played by Ms. Clementi.

The final work in the program, "Tartaniana seconda" (1956), is contrapuntal and tonal, giving the violinist and pianist music that stands in relation to the Italian virtuoso violinist-composer Tartini. The music has a delightful baroque-in-modernist virtuoso vivacity that to me is quite difficult not to love.

In all we have music that is very worthwhile, excellently performed, and captures a Dallapiccola who is always inventive and follows his musical vision in works that are not simply either modernist or neo-classical. They belong to his era surely, but they do so in sometimes surprisingly original ways.