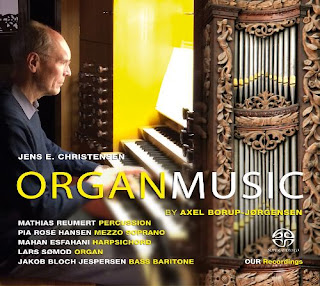 Those who like me revel in the cathedral organ and at the same time respond readily to high modernism in this context (for example in the organ music of Messiaen) will find the recent release of Axel Borup-Jorgensen's Organ Music (Our Recordings 6.220617) quite appealing, a sophisticated trip into an organic cosmos both mysterious and bracing.

He was born in 1924 in Denmark, grew up in Sweden, lived a quiet but productive life as composer and teacher and left this world in 2012. Originally primarily a pianist-composer (type his name in the search box above for a review of some of that), he became increasingly attracted to the organ, happily, since the current release contains nine works that stand out for their contrasting quietude and energy, their subtle shifts and cosmic openness. This is a music of matter-of-fact suchness rather than virtuoso complexities. Part of that has to do with Axel's insurance that the works would be well performed by very competent players who were not necessarily leading technicians.

Borup-Jorgensen's attention to nuance and atmospheric presence, of silence into sound and vice-versa ensure that we do not miss extended passages of demonically difficult passagework. His is a music of the earth and sky, a spiritual reaching out to sonic worlds we do not often dwell in, an original cosmos of organicity,

"Winter Music" for percussion and organ makes use of the cathedral space for some dramatically resonant drums against a searching organ. That one is perhaps the most dramatic but Jens E. Christensen's careful attention to detail and sympathy for the Borup-Jorgensen universe ensure that we are immersed in a sonic wash of sound that is as extended in modern realms as it is unassumung.

This is not music to overwhelm the senses or shock. It is a very personal journey into Borup-Jorgensen's exploration of sonic and textural possibilities latent in the modern cathedral organ.

Bravo!
Posted by Grego Applegate Edwards at 5:45 AM