Sergio Cervetti, Sunset at Noon, Six Works in Memory of 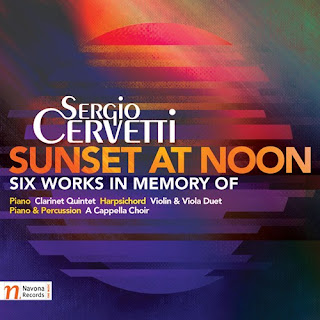 An individual modern American composer of character, Sergio Cervetti brings to us a new anthology of works in the chamber mode, Sunset at Noon, Six Works in Memory of (Navona NV6072). The theme throughout is of loss. It often dwells in realms of social consciousness, on questions vital to our contemporary world.

"Some Realms I Owned" (2010) for solo piano is based on a poem by Elizabeth Bishop, "One Art," and is in memory of a friend who succumbed to cancer. It is expressive and eclectic with romantic, minimalist and modernist elements conjoining to memorialize the person now gone.

"And the Huddled Masses, Clarinet Quintet" (2015) is alternately elegiac and tumultuously  energetic, nicely honed, slightly bitter, in memory of unwanted immigrants and refugees. There is no topic more urgently contemporary.

"Ofrenda Para Guyunusa" (2011) for harpsichord is dedicated to a Charrua Indian who was captured in Uruguay in the 19th century and put on display as a living "savage" in a Paris carnival. The harpsichord enters a neo-classical territory, ironically depicting the Indian as a sort of music box figurine, devoid of humanity in a world that has repositioned the exotic as a sort of fetish object.

"Sunset at Noon" (1995) in four epitaphs for violin and viola is a romantic-minimalist elegiac work that remembers four of Cervetti's students who died of AIDS during the first years of the epidemic.

"I Can't Breathe" (2014) for piano and percussion is in remembrance of Eric Garner, who uttered these last words while suffocating, a tragic victim of senseless police brutality. His videotaped murder helped spur on the "Black Lives Matter" protest movement. It is very rhythmic, shatteringly brittle modernism that perhaps models itself on the despair and anger of the victim and the protesters who came after.

"Lux Lucet In Tenebris (Light Shineth in Darkness)" (2002) for a cappella choir is the entrance of sacred music space in an otherwise secular program, the motto of the Waldensian Church where Cervetti was baptized. It in the end offers a way through the darkness of loss through meditation and refuge, seeking the light out of the darkness. The music is markedly neo-early homophonic in mood.

And so we have five sobering, pointedly life-critical tone poetry expressions that question loss and commemorate the victims and their suffering. The final work does not offer transcendence as much as it sacralizes a space where meaning and light might be found.

The music moves decidedly through a hermetic series of musical worlds with feeling and high expression. In the process it looks backwards and forwards as it tries to come to terms with the terminus points we all must face.

Cervetti's works analogize the anxiety of loss with a musical equivalent and a furtherance of understanding where it can be found. It is the everywhere of what remains that the music dwells within.