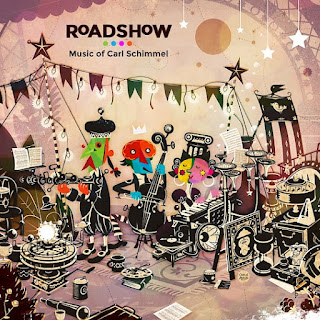 Carl Schimmel comes across as an almost wayward iconoclast on the recent CD RoADSHoW (New Focus 167). The music has an element of circus whimsy meets modern chamber seriousness, especially on the flute-cello-clarinet-piano work "RoADSHoW for OTTo" (2010/2012) and "RoADSHoW FoR THoRA" (2015), for clarinet, violin, cello and piano.

The song cycle "FoUR NoCTURNES FRoM 'THE OBLIVIoN HA HA'" ((2010) has a rather soberly expressive contemporary post-serial demeanor, punctuated by the burnished vocal quality of  mezzo-soprano Lucy Shelton and the carefully drawn parts for the quintet of instrumentalists known as the DaCapo Players.

"String Quartet #2 'Six Faces'" (2010) begins with a dense thicket of strings, which metamorphoses into quietly expressive worlds and contrasting moods inspired in its six movements by six varied paintings. The music in the composer's vision is like a six-sided cube, a single woman in six different faces or identities. It is a very dramatic, modernistically complex work that shows the hand of a master chamber craftsman at his finest.

"THE PISMERIST'S CONGERIES" (2005) takes flute-violin-cello-piano form with nine movements, each musically describing an object in the collection of a pismerist (a collector of small or insignificant things). The character pieces/sketches have a playful quality and bring the program to a satisfying close.

Schimmel gives us equal doses of whimsy, mathematical-musical rigor and expressive power in this collection of works. He goes his own way to a happy result. Anyone with a modern-oriented set of ears will do well to check this music out.


Posted by Grego Applegate Edwards at 6:08 AM