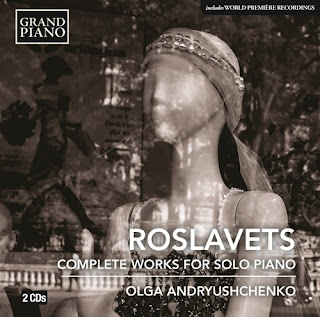 Nicolay Andreyevich Roslavets (1881-1944) is currently at best a footnote in the history of Russian 20th century modernism. Yet Stravinsky at one point called him "the most interesting Russian composer of the 20th century." Now there is a chance to explore his work in depth on the recent 2-CD set Complete Works for Solo Piano (Grand Piano 743-44).

Olga Andryushchenko does the duties as the pianist throughout. Her fluid readings seem expressively right for the music. Roslavets was a victim of Soviet disapproval and so never got a lot of exposure or recognition. This complete piano set includes a good deal of undiscovered and reconstructed works that see the light of day here for the first time. Many are first recordings. It is much more involved than one has a right to expect from a long-unknown. There is a kind of pristine coming-into-being to be heard with great profit if you give the music a chance.

The music is programmed to follow roughly a chronological order. The first period of his music, say 1914 through 1916, finds the composer in a rather Scriabinesque mode. From around 1917 through 1923, the influence remains in terms of a poetic rubato, yet further modernizes in terms of an idiosyncratic tonal ambiguity and the use of what Roslavets called "synthetic chords."

To get the maximum out of Roslavets, you need to cast away expectations and let the music itself work its way into your listening mind. It is something a Scriabin enthusiast (such as myself) will see as a further step into a modernism that mostly dead-ended but in the hands of Roslavets convinces and holds its own even though the vibrant currents of modernism by mid-century had largely jettisoned the cascading rubatos that Roslavets embodies in his very own way.

Why the Soviet Union party censors should see this music as objectionable need not detain us much. Clearly they found any kind of formalism, or any kind of autonomous musical striving counter-revolutionary. All must be an arm of propaganda. Sometimes composers were able to satisfy the dictates of social realism or circumvent them and still make great music and keep on. Roslavets could not find a way and more's the pity.

At least with this two-CD set we are treated to some exceptional music that deserves our respect and admiration. I find the music much to my liking. It has a brilliance of its own and that mysterious cosmic quality that Scriabin pioneered. But it stands or falls as Roslavets. It stands.

Recommended for Russophile modernists and anyone interested in the trajectory of modern solo piano, surely.

Posted by Grego Applegate Edwards at 6:35 AM