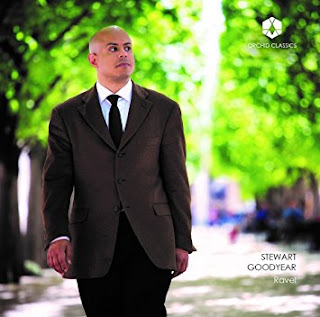 Some composers and compositions have formed such a seminal part of my life experience that they have become important residents of my "permanent" musical mind. The piano music of Ravel (Orchid Classics 100061) qualifies in very absolute ways. When particular works enter into my imaginary shrine of eternal verities, they usually do so in terms of my memory of specific performances that I either first heard at a younger age or versions that I have since come across that somehow have redefined my vision of what the music is about.

For Ravel's solo opus I fell upon Samson Francois's 3-LP set on Seraphim many years ago and it has ended up as a benchmark standard for comparison. The versions are not in any way flashy but carve out each musical statement with a care and a fidelity that seem close to what the composer himself heard. I have not had time to audition any of the other complete opus recordings, though I've experienced enough Gieseking Ravel that I imagine his set would be ravishing. A real ear-opener was the old Everest Archive of Piano release of Ravel playing his own music on the touch sensitive player piano that was state-of-the-art in his day. The piano roll transcription of "La vallee des cloches" from Miroirs was one of those revelations you can get when you hear the composer's own version of something for the first time. It is the opposite of a virtuoso approach, slow, brooding, atmospheric, lingering over every note so that the "Valley of Bells" as just that came through like never before for me.

With all of the above as a prologue. . .  I was interested to receive pianist Stewart Goodyear's Ravel, a single CD compendium of some of Ravel's most beautiful pieces. Goodyear has fabulous technique which he puts to brilliant use on movements that can be taken much faster than the norm, so that a shimmer of pulsatingly ecstatic passagework transforms the music to something excitingly other at times.

Yet when appropriate Goodyear can dig into the pastoral and/or reflective sort of lyricism that "Le vallee des cloches" or "Pavane pour un infante defunte" demands.

We are treated to the sort of dual polar readings he excels in--with the music of "Jeux d'eau," "Sonatine," "Miroirs," "Gaspard de la nuit," and the "Pavane."

In the end Goodyear brings an exceptional beauty and sparkling dazzle to these works that is nothing short of extraordinary. I still cling to the Francois and Ravel LPs as a sort of bedrock given for these works, yet I find Goodyear opens other vistas for me, other ways to hear much of this music. Anyone who already loves these pieces as I do will find in the Goodyear spirit a new take on it all. It is tour de force pianism, sometimes incredibly exciting.

Recommended with no reservations whatsoever!
Posted by Grego Applegate Edwards at 6:44 AM