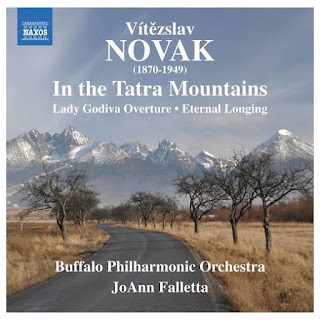 JoAnn Falletta and the Buffalo Philharmonic Orchestra can be counted on to do justice to late-romantic, proto-impressionist scores. And so they do us a real service handling the ins and outs of composer Vitezslav Novak (1870-1949) and his In the Tatra Mountains (Naxos 8.573683).

As can be heard in this three-work program, Novak was a Bohemian Nationalist who constructed vast panoramas that perhaps owed something to Dvorak but took the music into the 20th century in his own way.

The three works open Novak's musical world with a maturity and a sense of motion and tone color painting that mark him as talented and eloquent.  You can hear echoes of Bohemian folk music but indirectly for the most part, as if reflected by distance and wide spaces in woodlands or mountains.

Each of the three have character and very worthy orchestrations. They seem descriptive but well beyond a literal program. And so as we immerse ourselves in the title work "In the Tatra Mountains" (1902), and the following pieces, "Lady Godiva - Overture" (1907) and "Eternal Longing" (1905). We linger in expressively evocative worlds, now pastoral, now in a terrain of inner feelings and passions, always with a sense of proportion and contrast.

Novak may be pretty well forgotten to most of us, but Falletta and the Buffalo Philharmonic give us very musical reasons to revel in his rediscovery. The three works give us much substance and pleasure. And so there is a good deal to appreciate on this disk.

Recommended.
Posted by Grego Applegate Edwards at 5:42 AM