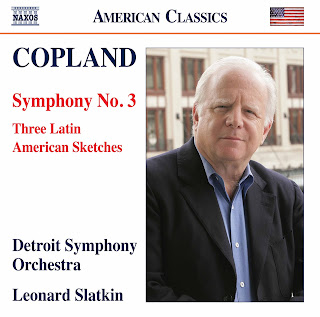 Why I am not sure. I have had some recorded version of Aaron Copland's Symphony No. 3 (Naxos 8.559844) for many years. Yet upon hearing this new version by Leonard Slatkin and the Detroit Symphony Orchestra, I am struck by why I have not been more mindful of its power and great beauty. I hear it as if for the first time. Perhaps it is in part because the fourth movement is performed in its original uncut form, it alone running some 15 minutes. It endpins the symphony in a palpably more dramatic way.

And in its longer form is becomes something more than a quotation of his seminal "Fanfare for the Common Man." It instead becomes a central thematic element.

Yet it is more than merely that. Like "Appalachian Spring," where the Shaker hymn "Simple Gifts" tops off the work and gives it a trajectory, yet contains all in all some of Copland's most evocative pastoral music, so too the Third is redolent with an earthy joy, at once pastoral and filled with both rural and, if you will, some of the bustling celebratory complexities of the American town. And too the "Fanfare" is a thematic culmination.

So many years later, we can be less mindful of the central role the end of WWII is meant to play out in this symphony, written in 1946. Like Shostakovich and Prokofiev did in their symphonies of this period, it expresses a relief that the struggle is over. Copland's general sanguine outlook gives us something more in the line of pure joy than his Russian counterparts may have expressed. That is only to say that Copland remained Copland, as Shostakovich and Prokofiev remained true to themselves as well.

And in all that we hear a near ideal reading of the symphony by Slatkin and the Detroit Orchestra. The placid beauty of America at peace, the bustle of renewed life and the tribute to the heroic efforts of "the common man"come together for a whole that I seem to hear cohesively as if for the first time. The longer version of the final movement helps give the work a new balance it may not have quite as readily in the version we usually hear. But Slatkin gives each element equal and detailed weight so that we come away moved and satisfied.

As a bonus we also get a nice performance of Copland's 1971 "Three Latin Sketches," which fits in as a rewarding coda to all the music here.

So that is what we have on this one. It is a version of Copland's Third that makes very musical sense out of the score, balances out expression and nuance, draws out the very powerful  totality Copland meant us to hear. It is landmark and worth the trouble, very much so.