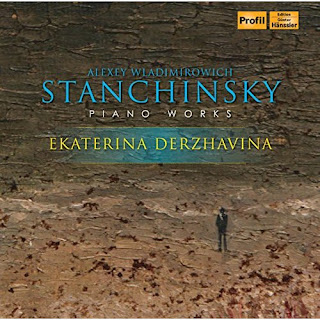 It is a truth albeit an obvious one: you never know until you know. We know that by living our lives. And listening. Someone a while ago might have advised me to listen to the Piano Works (Profil Edition Gunter Hanssler 170003). Hearing is believing, in the end. And the results reveal a composer of original, somewhat eccentric and unexpected stature. Alexey Wladimerowich Stanchinsky (1888-1914) died at just age 26 at the start of a religious pilgrimage that took him just a short distance from his home. He had to wade neck-deep across a river and the exposure cut short his existence.

He was a student of Taneyev and studied piano at the Moscow Conservatory. A severe bout with mental illness undermined his health. The pilgrimage put the final punctuation on his life.  But he left behind a bold and daring series of piano works, some remarkable examples of which can be heard as played with zeal and precision by Ekaterina Derzhavina on this fine volume.

The first bars of his first opus "Zwolf Skizzen" let us know we are in for something unusual. Sorabji or Alkan come to mind, not so much as an imitation as a parallel. Then there is Mussorgsky, surely. The rest of the pieces in this startling opening salvo bear out the first impression. This is a remarkable late romantic kind of modernism that must have startled its hearers even more than it does our modern listening selves. More than 100 years later, however, we nevertheless sense we are in the presence of a unique musical voice.

The "Praeludium," "Erste Sonate," and "Lieder ohne Worte" confirm our first encounter.  Often enough there is a thoroughly "conventional" Lisztian overwrap of rhapsodic effusiveness to be heard. But even then the actual sequences can startle for the unexpected progressions or melodic directions the music takes. And that veneer can strip away and you get another look at a musical mind that strikes boldly out on then untrodden paths.  As the liner notes state about the sonata, there is a "distinct predilection for the juxtaposition of diatonic modes [instead of the customary development of chromatic harmonies]." Yes, and how they sequence is not expected either. Chords in fourths, even, but not like Scriabin. There are all kinds of things in this music that set it apart. Yet it reflects the veneer of the grand romantic piano tradition, too, when that seems appropriate. Unexpectedly, always.

The sessions come from 2004 and 2005, so my guess is this has been released before? It makes no difference. This is a revelation. Stanchinsky, had he lived, could have taken us into another universe of possibilities. Yet there is plenty to hear already in his short life's output. Ives went his very own way in the US. In Russia Stanchinsky was going somewhere bold, too. He was cut short. Thankfully we have this volume to savor. Stanchinsky may have been a well kept secret. We can now let this music out in the open. Let it breathe. Thank you, Ms. Derzhavina for giving us these beautiful performances. Thank you, Stanchinsky for your short life and its music!
Posted by Grego Applegate Edwards at 7:04 AM