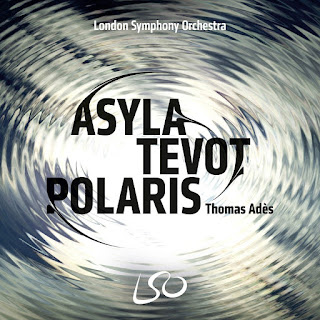 For present-day modernist contemporary orchestral music, one does not find a more talented and sure handed exponent than the English composer Thomas Ades. Put simply he is an inventive and orchestrational master of our times. Three major works and a short rejoiner comprise a most welcome contribution to the Ades discography by the London Symphony Orchestra. The four compositions cover a broad period between 1997 and 2010.

Asyla, Tevot, Polaris (LSO 0798) and the brief "Brahms" canvas an enchanting and stirring terrain that tightly knits original content with brilliant orchestral apportioning. One feels with all of this music that Ades is in his element, that there feels like there is a one-to-one relationship between musical ideas and how they are shaped by the orchestral mass.

"Polaris (Voyage for Orchestra)" (2010) explores, in Ades' own words,  "the use of star constellations for naval navigation and the emotional navigation of the absent sailors and what they leave behind." It is a deeply spacial and ghostly panorama that pits brass choirs off stage with myriads of rapidly moving but quietly articulating points of musical light. All twelve tones are utilized with three poles of magnetic pitch centers holding sway one by one. It is as if the vivid night sky reminds us of the sailors who have left us on a journey no longer dependent on currents and oceanic spans.They now are within those constellations, journeying forward outside of our standard accessible material world? Maybe.

Brahms (2001) is a brief homage to what Ades refers to as the logic of Brahms' music, as aside from the warmth and beauty of it. Samuel Dale Johnson on baritone presents an expressive text atop an orchestral atmospheric.

Backtracking to the opening "Asyla" (1997), it centers around places of safety, of confinement, of last resort, away from a mad world. They are epitomized by the concert hall and the presence of orchestra, a place where "we feel at home, or where we once felt at home." There is something remaining of the madness of life present in the score, a holding in place and aestheticization of the danger outside, a cultural domestication. The music is pointed, colorful, and resituated within itself in ways that evoke the refuge and the thing from which we flee, if I can take the liberty of my own reading of it all.

"Tevot" (2005-6) is effectively Ades' second symphony, based on the Hebrew "tevot" which means both the bars in a musical score and words. In the Bible it refers to Noah's Ark and the reed basket fashioned by Moses' mother to take him down the Nile, in both cases places of refuge, structures made of "firm materials." Ades conceived of these complexes of meanings in a totality, where the bars of music act as vessels for the music and its journey through fluid danger. The music creates organic periodic repeating and variational snippets bordered by bar lines. It is ingeniously structured and fashioned, containers and their contained. Brilliant in its immediacy and parcelling out. It is that.

So we have the sum of what we most willingly hear on this new collection of Ades' works. Each is striking, seemingly inevitable yet paradoxically surprising in its individual outcome. Ades is like that. You get what you have every reason to expect, but in that getting you are moved into the realm of the unexpected.

The CD comes in two versions on two discs, the standard two-channel CD audio version and the multiple voiced BluRay.

Either way this is extraordinary music, landmark-scapes of richly varied orchestral sense. Get it by all means!