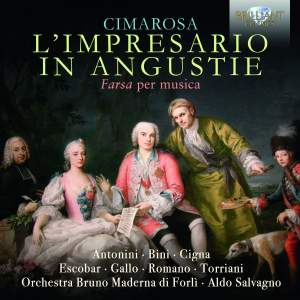 Sometimes we do not know what we want until we get it? So when the name comes up of Dominic Cimarosa (1749-1801), I know I should listen more to...something more of his, but what? Brilliant Records gave me a good answer in a new recording of his opera buffa L'Impresario in Angustie (Brilliant 95746). It is the original one-act work nicely disposed, clearly sounded, performed with some zest and fit onto a single CD.

The liners summarize the reception-performance history nicely. Fourteen years of opera writing preceded L'Impresario, by my count no less than 11 works. So then sometime around 1786 L'Impresario saw its premiere with some of the most prominent opera buffa stars of the day in principal roles. The plot centers around a sort of play-within-a-play (cf., Hamlet, 200 Motels) about an opera impresario and his attempts to stage an opera with comic antics a result. It was a great success, resoundingly received and performed all over Europe. No less a personage than Goethe was an admirer.

In 1791 a revised version translated into German by Goethe himself was staged. A two-act version came into being in 1793 but the new music was not by Cimarosa. But in the meantime Cimarosa wrote in 1792 Gli orazi e i curiazi, which the liners inform us is considered his masterpiece (and of course that reminds me how much there is yet to learn).

After a century of neglect L'Impresario was revived in the 1930s with stagings in Turin and at Teatro alla Scala in Milan. And now we have this fine performance on CD with convincing soloists and the Orchestra Bruno Maderna di Forli, all under conductor Aldo Salvagno.

After a few listens the music has come alive for me and I am happy to say that everything brings me a good amount of pleasure on this disk. The Brilliant price makes this an attractive offering too. Happily recommended. It is a good thing, for both widened appreciation of the period and the joy of engaging music well performed.
Posted by Grego Applegate Edwards at 8:45 AM