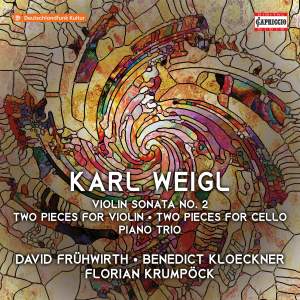 When I came back to the East Coast from Chicago in 1985 I duly paid a visit to the Classical Record section of Tower Records in Downtown Manhattan. There I happened to unearth a CRI recording of the music of Karl Weigl (1889-1949) and I took it home. I was impressed with it. Now some 44 years later I had the chance to hear and review some additional music of his, namely his Violin Sonata No. 2, Two Pieces for Violin, Two Pieces for Cello, Piano Trio (Capriccio C5318). I welcomed it. These chamber works are played with sparkle and dash by violinist David Fruhworth, cellist Benedict Kloeckner and pianist Florian Krumpock.

In the case of this CD and the record from years ago there is a feeling of being in the presence of a composer who is original and even brilliant, yet not overtly innovative like Schoenberg or Ives, not a leader in the teleology of where music goes so much as an entity who straddled the end of Romanticism and the beginning of what followed. And it is not so much a matter of where he could be positioned in the spectrum of styles, rather how he does what he does.

Weigl was in that same Vienna as Schoenberg and his followers. That he stayed with tonality and went his own way hardly matters now. For there were plenty of works that went into the more advanced territory and we can listen and perform them at will. The history of music sometimes reads as a description of Boy Scout hikes. We identify the Pack Leaders and pay homage to them but in some other "real" world there was no hike, just a lot of artists creating. We get to choose what we hear. Each work is a frozen moment in time and there is no Boy Scout Troop to be seen anywhere.

And that is a good argument to recommend that we stop ignoring someone like Karl Weigl, whose music most certainly was not a leading voice of its time yet there is some truly inspired music to be heard from his likes. The current volume shows us in marvelous performances why we should not ignore Weigl, even if he does not fit into the March of the Immortals! It is excellent music. That is reason enough. Highly recommended.