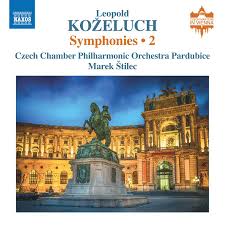 The lid is off! People are discovering composer Leopold Kozeluch (1747-1818) and his music is back by popular demand. Kozeluch-mania is infecting us all! Ed Sullivan is frantically trying to program his music for a spring episode! Well of course that's not really the way things like this go. Classical composers may justly and happily be revived in the public esteem, but it is not like the art world where suddenly someone's works now go for a cool million. Not that much changes. Except there are CDs that come out that sell a bit and one might find a work or two on concert programs. But for those involved it is a happy thing.

For someone like me discovering Kozeluch, thanks in part to Naxos putting out his music among other labels, it does have an impact in my life, though you might not know it by observing my behavior. So now we have Symphonies 2 (Naxos 8.573872), a second volume of what I assume will be a comprehensive set of his works in this genre. The volumes are a part of "Czechoslovakia in Vienna," which of course reminds you of his origins and then his place of musical maturity.

I reviewed Volume One here (see index) and what holds true of that volume is present in the second as well. This further installment allows us to hear four more of his 17 symphonies. To give you a feel for the in-between-ness of this music, many of the symphonies call for a harpsichord continuo, which is fulfilled admirably by Jirina Dvorakova. There is that palpable level of pre-Romantic actuality to be heard.

And yet we hear a composer that has something more than a very well-crafted post-Rococo vivacity and drive such as Papa Haydn and a very young Mozart had as well. There is a foreshadowing of Schubert lyricism and Beethovenian ardor, and enough of it in its own way that you hear Kozeluch as a genuine voice of his times, sadly neglected by us over the several hundred years (as of this writing 201 years) since his passing.

The performances and sound are all you might ask for. All the symphonies appear to have been written between 1779 and 1787, so are a product of his tenure in Vienna, and too are fairly early on as far as his longevity goes. They are in every way worth hearing and studying at length, as are his piano sonatas and chamber works to the extent I have been exposed to them, and so too to you in words as I have reviewed these things in this space (see index). The symphonies as the liner notes tell us and we recognize, show that he is beautifully inventive and imaginative. If the liners point out in addition the influence of Cimarosa here and there, I demure and leave you to explore that along with me.

At any rate if you have the urge to explore the Classical Era, that is a worthy neglected figure from that period, here is a nice way to pay homage to the composers from then and hear one you probably have missed! I recommend it if you have the desire for such things.
Posted by Grego Applegate Edwards at 9:01 AM