Goldstone and Clemmow, Gershwin and Ravel: Music for Piano Duo 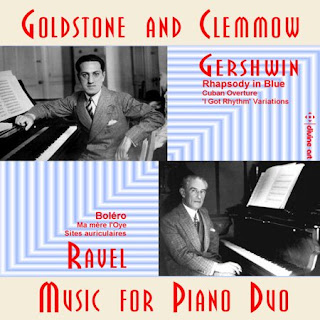 Here we are the day after Ravel's birthday and so an opportune time to speak of the CD at hand. It has been wafting through my ears just now and I am most certainly the better off for it. I speak of the piano duo Goldstone and Clemmow and their recent Gershwin and Ravel: Music for Piano Duo (Divine Art 25055).

There are many things going for this album. Goldstone and Clemmow seem ideally suited for the repertoire. They can work together as one instrument, no matter if they are very rubato or in tempo, they phrase with impeccable musicality, they are technically formidable and they utilize those abilities to realize this music with taste, plus they run the gamut of piano-touch strengths to bring out the music in all its poetic truth.

Both Gershwin and Ravel embraced to greater and lesser degrees Jazz as it was emerging and flourishing in the beginning decades of the 20th century. Both died in 1937 and so they cut a similar temporal swath in the century's musical developments in ways that oscillated between the Jazz-ish camps and the Modern Classical realms as well. Gershwin was perhaps the more Jazz-influenced of the two--and that had something to do with his songwriting Tin Pan Alley involvement of course.

The repertoire covered so nicely here shows Gershwin at his most Jazzy and as definitely Modern-oriented because not at all appreciably Romantic. What is most interesting is that Gershwin in these piano versions shows more plainly the spiciness of his harmonies at times and sounds less dated, which in some ways had to do with some of the Pop-Jazz (eventual) cliches. And of course Gershwin's songs and the chord changes to them had perhaps the most critical influence on later Jazz. We hear all of that in the original two piano version of his "'I Got Rhythm' Variations." But then we hear percolations too in his original piano duet version of the "Cuban Overture" and of course the original two piano version of his "Rhapsody in Blue." All of this Gershwin sounds very much the more vital and originally Modern in these original instrumentations. And thanks to Goldstone and Clemmow we get a very exciting reading of every bar of these works.

The Ravel half of this program gives us insightful readings too, but for slightly differing reasons. The "Mother Goose" music for piano duet is the first of the three works that reminds us that no matter how wonderfully masterful his orchestrations are, and he is a true master, to hear the sounds and sequences on the piano is to revel in just how startlingly inventive his music was even without the orchestral spellbinding. So that we hear with the "Goose," and too with the short and somewhat rare "Sites auriculaires."

But then the composer's piano duet version of the "Bolero" is about as startling a thing as anything on this fine set. The riveting rhythmic and melodic-harmonic insistence of the long buildup is a rejuvenation, a revelation, and so well played as to be a must-hear!

Highly recommended. Goldstone and Clemmow shine brightly and the music is sterling.
Posted by Grego Applegate Edwards at 10:03 AM