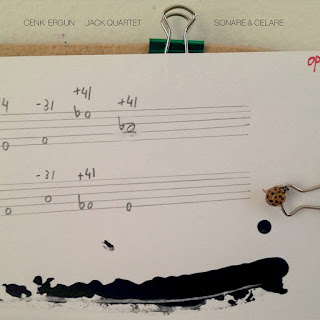 What is new in New Music? Judging by the albums I've covered in the last few weeks, it is still the case that anything goes and if it does so in good ways, we are all the better for it of course. This morning some advanced string quartet music in the High Modern mode--the ever-accomplished JACK Quartet give us an EP of the music of Cenk Ergun, Sonare & Celare (New Focus Recordings FCR238).

So what is this one all about? Turkish-born Cenk Ergun emerges from a protracted interaction with the JACK Quartet with a set of paired works that stand in important ways at polar opposites, Sonare loud, busy and dense followed by the more sparsely soft and celestial Celare.

Ergun's past involvement in electronic music production has had a large impact on how he composed Sonare and its ultimate performance by the JACK Quartet.  Some preliminary sketches of a few motives and repetitions were notated for the Jack Quartet. Their recorded performance of them formed the basis of a further set of notations, accomplished in part by splicing the results into new fragments, their subsequent further recorded performances  each created a new entity which was subjected to further dissecting and so forth, with successive generations of interactions leading ultimately to the results we hear.

That work is insistent, like some infernal machine, perhaps, going through its cycles. It is as much invigorating as it is unnerving, with the JACK Quartet in part because of the built-up interactions becoming something wholly other than a mere four-fold reader-interpreter of notations. They are something transcendent. The music most definitively jumps out at us in full dimensional ways.

Celare on the other hand is made up of air and light to Sonare's earth and density. As the promotional sheet that came with the CD points out, the work is built around "just intonation, Turkish modes, and early monophonic music." A most palatable sauce of sustained chords and microtonal movements forms the bulk of the work. It explores an effectively contrasting timbral-sonic universe of possibilities..

In the end the organic and the superorganic dramatically interact with automata and infernal machines? That may be fanciful but the JACK Quartet bring these two works into wonderfully lively existence as contrasting forces that Ergun has created and made dramatically memorable.

It is one of those advanced work complexes, one of the exceptional later avant creations that, as one listens frequently, becomes a completely unique and singular universe of sound. It stands on its own. Here is this!. Hear this.

Posted by Grego Applegate Edwards at 9:37 AM