Meredith Monk, Memory Game, Vocal Ensemble and Bang On A Can All Stars 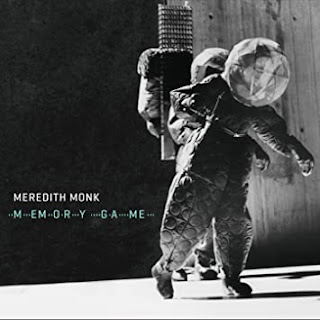 My first brush with Meredith Monk, as I may have mentioned before, was some time in the mid-70s when JCOA distributed her first album and I sent away for it for no other reason than I was exploring women avant artists and was open to something new. It was just her on vocals and ringing bowls, I guess they were. Her singsongy vocals and general unique way got my attention and I've been following her musical path ever since.

And now we have her latest, a nicely hewn chamber set in multiple parts entitled Memory Game (Canteloupe Music CA21153). It is a most interesting collaboration of Monk, her Vocal Ensemble and the Bang On A Can All Stars, the latter in this case an electric-acoustic chamber setting of some six instrumentalists, two doubling with their voices.

It is a gathering of some nine, mostly relatively short pieces from the past, ranging in time from 1983 (six), 1986 (one), 1996 (one) to 2006 (one). It hits me as I listen repeatedly that this in a way is Pop Art Music (in the Lichtensteinian sense). It owes something to the deliberately bright and sometimes irritating world of classical advertising jingles--especially from the '60s, a Brave New Age of products and processes, perhaps most vividly brought out in the piece "Tokyo Cha Cha." As the lyrics have it, "Let's cha cha me happy." It says it all by deliberately saying not much.

Like the classic Pop Art paintings, there is more than just some co-optation or appropriation. Like the best Pop Art was painterly, so Meredith's music is very "musical," filled with a personal style that too is at times NOT exactly pop-ish, and the catchy insistence of the music also places it of course into Bang On A Can territory--not unfamiliar as Minimal-oriented, setting aside all the problems with that term.

The lyrics are quirky, with snippets of what sounds Polynesian, what could be Yiddish, and other languages (Japanese?) interspersed with a deliberate, sometimes SpaceAge banality. The instrumental parts give the All Stars plenty to sink their fingers into (so to say) and the interplay of vocals and instrumentals is rather pristine in its deft combination of somewhat retro allusions and polyphonic complexities. The pieces are variously and nicely arranged for this ensemble by Monk herself, Michael Gordon, Julia Wolfe, Ken Thomson, Allison Sniffin, and David Lang.

There was a point somewhere in my second listen that the music fell together in my head and it has stayed there. Perhaps like Warhol's art there is a deliberate surface to things and that gives you the principal interactive means to your listening ends. Once you situate yourself where the music is, just like on her very first album only of course further on, there you are in a unique place. The ensemble and arrangements make this particularly special. As we live in some very tough times this music can be a foil to a place beyond, before, and outside all of the moment.

You most certainly should give this music your attention if you want to know a newness. I cannot guarantee of course that you will love this program, but it is no different than ever in that way. We cannot know until we try something. This is surely among her very best.
Posted by Grego Applegate Edwards at 10:35 AM