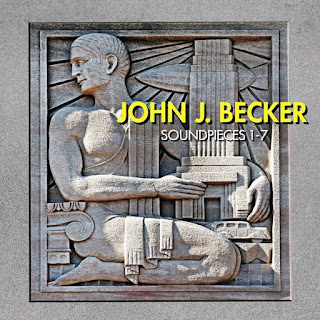 John J. Becker (1886-1961) has been enshrouded in obscurity in our lifetime, even though he was a part of an early Modern US group of composers that were extraordinarily important in the development of the New Music movement. The "American Five" were known especially in the '20s and '30s of last century as the most dissonant and advanced voices on the American scene. It placed Becker in the illustrious company of Charles Ives, Carl Ruggles, Henry Cowell and Wallingford Reigger.

The good news right now is that we can hear in a new two-CD recording his all-important chamber series Soundpieces 1-7 (New World Records 80816-2).

The liners to the CDs give us context. Becker followed in part Charles Seeger's idea of a "dissonant counterpoint" where the goal was the opposite of a traditional, continual consonance. There were Neo-Classical elements to be heard and iconoclastic influences through personal friendships with Cowell and Ives, along with a Catholicism which gave him a conversant bond to church music form.

The seven Soundpieces were written between 1932 through 1949, with five hailing from the early to later '30s and the last two coming forth in 1942 and 1949. Nos. 2 and 4 are for string quartet, No. 1 for string quartet and piano, No. 3 for violin and piano, No. 5 for solo piano, No 7 for two pianos and No. 6 for flute and clarinet. All seem to revel in their advanced dissonance, with a structural flourish and rather extraordinary expressionism.

In the liners Kyle Gann discusses criticisms of Becker's music over the years, that his rhythmic sense is not always as lively as his harmo-melodic advances, that perhaps there is just too much dissonance in the end. Yet the Soundpieces are examples of his very best.

I find especially to my liking Soundpieces 3 (for string quartet, the engaging Scherzo most notably) and 4 (with lots of very engaging violin-piano interplay). The monolithic boldness of the solo piano Number 5 has a heroic grandeur that draws me in increasingly the more often I listen.

I for one am very happy to have this music to hear repeatedly. The performances are quite respectable, quite good. Kudos to the FLUX String Quartet and Conrad Harris (the latter for both his quartet and solo violin role, Joseph Kubera on piano with Adam Tendler on the two-piano work, for Margaret Lancaster on flute and Vasko Dukovski on clarinet. They go a considerable ways to make this music come alive and they are to be commended for it.

Anyone like me who takes great interest in the rise of 20th Century High Modernism will be glad to have these Becker works to discover and explore. There is a freshness, an almost naive faith in the liberating power of dissonance that is both touching and invigorating to hear, surely worthy of our consideration. Becker may not quite be another Charles Ives yet this music sounds nearly as pathblazing as it must have when it was first performed. Recommended for all New Music aficionados interested in the history of it all.