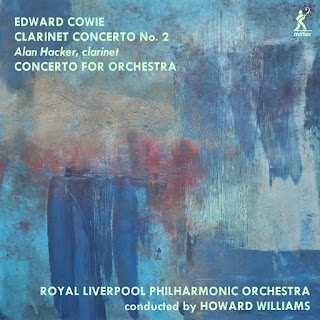 It falls upon me as a reviewer to listen to a lot of music by composers not all that well known at present.The ones that interest me tend to get covered, naturally. Today is another good example. Edward Cowie (b. 1943) brings to us some important works on a recent CD.

The program begins with Clarinet Concerto No. 2 (1979-80) featuring Alan Hacker sounding wonderful on the solo instrument, and then the Concerto for Orchestra (1981-82) (Metier MSV 92108). The Royal Liverpool Philharmonic Orchestra conducted by Howard Williams do the performance honors, and they sound very convincing in their role. That in part comes out of the composer's timely receipt of the 1984 Grenada Composer-Conductor Award which involved extensive access to the orchestra and a finely gauged experiencing of hearing in depth how a full-throated orchestra could shade sounds. The results can be heard in this recording made some 30 years ago and now finally commercially released as a CD for us to appreciate.


Cowie studied with Alexander Goehr. The "Concerto for Orchestra" is dedicated to him. The two works on the program find Cowie in a lucid Modernist Dodecaphonic mode.  This 1979-82 period was mainstream to the 12 tone orchestral work. Yet he does not just feed us generic things, not at all. Both works are marked by an acute sense of sonarity and a sure orchestrational ability. And so too the composer's involvement with thinking about the movement of bodies of water in nature is an animating factor, partly as a result of his involvement with and appreciation of sailing at the time.  The "flow" of the music in important ways has a natural quality of such forces in the world and nicely so.

Cowie's "Clarinet Concerto No. 2" turns out to be up there among the handful of really worthy such works from the later 20th century. The continuous orchestral-solo interplay makes for excellent dramatic dialog and a superior harmonic-melodic advancement and expressive daring.

The "Concerto for Orchestra" stands out for its continuous sectional lucidity, its ultra-Modern inventive expression and extraordinary group interplay.

Bravo to all concerned!
Posted by Grego Applegate Edwards at 10:51 AM