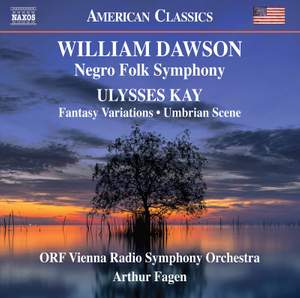 As the back cover to the CD notes the Dawson Symphony's three movements are in the form of continuous variations on a number of spirituals. It was premiered by Leopold Stokowski and the Philadelphia in 1934 and took on final form in its 1952 revision heard here. There is a web of interconnections and endless permutations on the spiritual tonality and its implications. One occasionally hears a motivic development that reminds of Dvorak's "New World" and that is only natural of course given its enormous stature in the day especially. It is only a touchstone relationship however. The Dawson work itself stands proudly enough and statue-esquely enough on its own terms, its own feet.

And indeed after a number of listens the music comes forth as a tabula rasa when all is said and done. There is plenty to follow with interest, surprises, reaffirmations and confirmations of a rooted folkway treated with imaginative content and development and a sure sense of orchestral completeness. Hearing this now after so much has gone down the pike from 1932 to 2020 means that we do not need to trace its influence or lack thereof on what came after. That no longer matters so much is the presence of music we can luxuriate within.

The two Ulysses Kay compositions are worthy companions to the symphony. "Fantasy Variations" (1963) has a declamatory brilliance and a good amount of harmonic advancement to make it a part of the Modernity that was so important then. And there is a fluidity of expression that builds its home in our ears so that we might partake of the experience increasingly and rewardingly.

His "Umbrian Scene" (1963) as the jewel box copy notes is "lean and sober." It is poetic and wonderfully serious, an Occam's Razor of spareness which turns out is a rather nice way to end the program, going then from full thematic abundance to a searching matter-of-fact set of wise erasures and the profound essence of that which remains--so expressively underscored.

So when all is said and done if you missed this CD and these works it might not alter your world that much. Nonetheless the music is carefully crafted and inspired. Dawson and Kay were key Afro-Americans on the Modern Classical scene of last century. For that reason alone it is worthwhile to check this music out. Happily recommended.


Posted by Grego Applegate Edwards at 10:13 AM