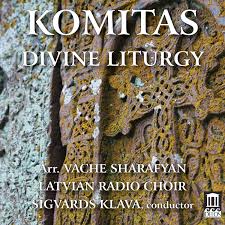 Komitas Vardapet (1869-1935) was as many will know one of the leading lights of Armenian Classical music, the founder in many ways of the Armenian Nationalist school of composers. On the 150th anniversary of his birth the mixed Latvian Radio Choir performed Vache Sharafyan's satb arrangement of the monumental Diving Liturgy conducted by Sigvards Klava. The choir went on to painstakingly record the full version (Delos DE 3590) which we consider today.

The results are all one might hope for, both in its own way in terms of Orthodox sacred music and Armenian. Sadly it was completed right before the Turkish genocide began in 1915. Komitas survived yet lived as a broken man for the last 20 years in a Paris asylum.

The performance winds along nearly timelessly as the nearly 80 minutes of the full score makes for an ideal vehicle for the Latvian Choir and soloists tenor Armen Badalyan and bass voice Hovhannes Nersesyan.

Anyone devoted to Armenian classical strains and anyone interested in Eastern Orthodox sacred music will no doubt take readily to both the score and the performance. A must for Komitas lovers.
Posted by Grego Applegate Edwards at 7:28 AM