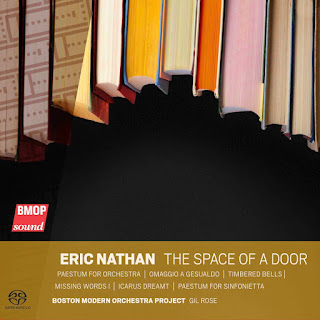 Consider this broad swatch of orchestral and chamber orchestral compositions on a new program of works performed with care and true musicality by the acclaimed Boston Modern Music Project under Gil Rose (BMOP Sound 1071). In the process of listening we come ear-to-ear with composer Eric Nathan (b. 1983), decidedly a new voice to be reckoned with from today's Modern US New Music scene. On it we are treated to some six works (seven if you count a multiple version as two items) spanning the period from his student days to recent times, 2008-2016.

Nathan studied with Steven Stucky, to whom he dedicates "The Space of a Door."  Eric currently holds down the position of Assistant Professor of Music (composition and theory) at Brown University and also enjoys a position as a Composer-in-Residence with the New England Philharmonic.

"Paestum for Orchestra" and the alternate "Paestum for Sinfonietta" (both from 2013) bookend the program and give us a kaleidoscope of alternately circling and linear oscillations in a poetically orchestrated matrix.

"Omaggio a Gesualdo"  (2013, rev. 2017) follows, with expressive string lines that give out with a present-day and imaginative equivalent to Gesualdo's poignant laments.

The title work "The Space of a Door" (2016) gives us some lyrical, dramatic and haunting music orchestrated vibrantly. As with the program as a whole this is in an expanded-tonality that has the spicy tang of a Modern palette without abandoning key centers. It evolves melodic-harmonically with a crescendo of expression that subsequently subsides into a reflective exploratory affirmation of a mystery. The music was inspired by the Providence Athenaeum built in 1836 and borrows from the opening motif of Brahm's Second Symphony! Beyond that it lives and breathes with its very own creative momentum.

"Timbered Bells" (2011) begins with an almost Varesian fanfare that dramatically extends into aural space effectively. It is a rather explosive showcase of orchestral expression, nice to hear.

"Missing Words I" (2014) most evocatively illustrates active verbal imagery in three short movements (Railway-Illusion-Motion, Autumn-Foliage-Strike-Fun, and Fingertips-Dance). It is music of great character and animation, both fun and rewarding to hear.

Finally there is "Icarus Dreamt" (2008), the earliest of the works represented. It is a gem of animation and dimensional musical action.

One comes away from this album as one often does with the Boston Modern Musical Project series, with the feeling that one has been in the presence of music that deserves to be more well-known, certainly. It is a good listen, an excellent program for anyone interested in the music of today. Bravo!

Posted by Grego Applegate Edwards at 7:44 AM