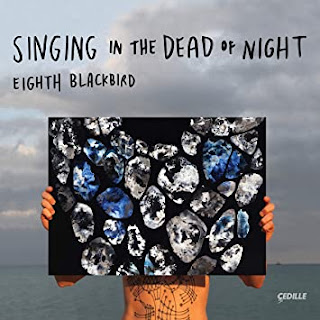 As always, music changes over time. Wake up one day and things are different. That is the case with the New Music ensemble Eighth Blackbird and their recent compilation of Minimal Post-Minimal works entitled Singing in the Dead of Night (Cedille CDR 90000 195). It is a series of world premiere recordings of new works by three composers well known for their innovative music, associated often enough with Bang On A Can and/or the central contemporary Minimalist contingency. This new offering reflects a changed all-over tendency with a modified take on repetition. The most obvious feature of the program is that on the whole things do not repeat as serially as they have in classic Minimalism. There is repetition but it is more integrated into the overall syntax of the harmonic-melodic spectrum of a work.

The Eighth Blackbird sextet collaborate with the composers for this three-work program meant to be played together in the order given. The ensemble excels in performing such music as one of the very finest of New Music chamber groups out there today. Each of the titles are taken from the Beatles song lyrics for "Blackbird" and subsequently tie meaningfully into the Eighth Blackbird's essential relation to the musical sequence.

Michael Gordon has not been one to be easily pinned down to a steadfast niche. So on his "The Light of the Dark" there are patterns that continue throughout, rhythmic complexities and layers of instrumental functions that grow and evolve organically without necessarily entering a hypnotic mesmeric mode. The lead violin part and its counterpart contrast against the cello motif to work well with each other and serve also to set up various musical punctuation events that pepper the work throughout. Eventually strings and piano swap roles and the variational continuity keeps all interesting.

David Lang's "These Broken Wings" in three parts recurs in between the other works for a certain dramatic flair. The final movement "learn to fly" has a rocking riff-like motif that the whole ensemble enacts with gusto. It relates to the opening first part in that there are familial motifs with the first movement being complexely quasi-polyrhythmic yet as driving as the finale.The middle part "passacaille" has reflective openness that breaks up with percussive outbursts. The melody line grows more noteful yet still gradual. It contrasts well with the outer movements.

Julia Wolfe's "Singing in the Dead of Night" evolves into a hard-edged, edgy brittle-supple sound with nicely ebullient string bowing and percussive blocks of dissonant piano punctuating it all. It hangs together well and evolves with increasing dramatic energy as it morphs into an airborn-like conclusion.

In the end the composers and ensemble create this five-part sequence as something over and above each individual work. The virtuoso abilities of the ensemble commingle with the broad vision of the three composers to create a cooperative whole that never becomes tiresome, wears well over time and creates a complexity far above the individual components taken singly.

It is a distinctive forward step in the New Modern-Post Era. It emerges without undue effort, naturally and without pretense. Highly recommended.
Posted by Grego Applegate Edwards at 8:09 AM