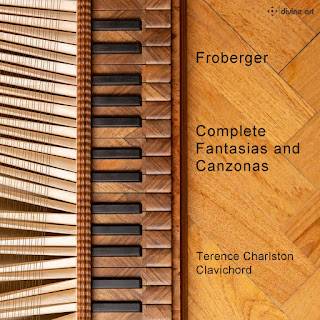 After a near lifetime of intensive listening I nonetheless have known next to nothing of Johann Jacob Froberger (1616-1667). Until now. A new CD gives us a lot of music, his Complete Fantasias and Canzonas (Divine Art dda25204). Terence Charlston brings nicely to us this abundant program from the aural point of view of a specially constructed period clavichord that gives out with a most distinctive tone. If it sounds more like a sewing machine than a harp that means one should try to open to its special sound and meet it halfway, so to speak. There is a tender fragility to the music as played on such an instrument--not so grand as it is modest, human, matter-of-fact and in-itself. And special to the time period concerned.

Vivaldi was born in 1678, Handel and Bach in 1685, Rameau in 1683. We general consumers of classical music tend to know later Baroque masters more than earlier ones. This in part explains why Froberger (born in 1616)  is not exactly a household name. True too is that the music we hear on this album does not proclaim itself as bold expression as much as the music of later Baroque masters did. Instead there is workmanship of a fine-hewed sort, of a quality that is best experienced cumulatively rather than climactically. And it is true in this that the music must be listened to with repetitive persistence, all the better to be able to gauge it more fully.

This is very contrapuntal and one might characterize the music as tightly knit and phrased in a longer, wider sense more than going for a pinpointed thematic brilliance. It thrives in how all works together in the long term, with the themes more like a long meandering river than the spectacular thematic highlights we might sometimes expect from a Bach or Handel. It is not that the themes are without distinction, but they are geared to make the overall contrapuntal matrix the main thrust. For that the music is masterful, lucid in its heightening of the "structures of the long run" (to borrow a phrase from anthropologist Marshall Sahlins).

In the end this is a carefully detailed reading of some gems from 1649, music that maintains high levels of contrapuntal brilliance as it gives an uncompromising vision of intimate chamber soundings some thirty years before the births of Handel and Bach. It is music any thorough explorer of Early Music should be happy to immerse self in. Good one! Take a listen.

Posted by Grego Applegate Edwards at 8:30 AM