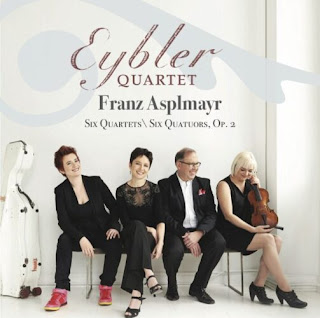 Who is Franz Asplmayr and why does it matter? He is associated with Vienna, lived 1728-1786. His early Six Quartets Op. 2 (Gallery Players GPN 20001 2-CDs) are now available to us (for the first time recorded in their entirety) by Toronto's Eybler Quartet. They were first published in 1769 when the composer was in his early 40s. By then he had been composing and playing violin in Vienna since around 1761 and would remain there in this capacity until his death.

By the end of his life he had composed 41 symphonies, 43 quartets, 70 trios and yet was best known in his lifetime for his theater works, including some 25 ballets. Patrick Jordan, Eybler Quartet's violist, tells us that getting acquainted with Franz Asplmayr's early quartets is a great way to contextualize the quartets of Haydn and Mozart into a wider Viennese totality. After listening to this fine two-CD set a number of times I feel I get what he is after there. Asplmayr is not quite a Mozart  nor a Haydn yet he shares a sort of Viennese inventive lyricism and brio with them. These are relatively straightforward quartets, not terribly complicated but then they sing out with a sort of essential joy. In this way they embody the opposite of banality.

I well loved the Eybler Quartets's rapid-fire renditions of the Beethoven Op. 18 quartets (see my review posts for April 8, 2018 and July 16, 2019). And now these Asplmayr recordings are again masterful in ways that confirm the wonderful freshness of the Quartet's vision of the Classical period. Strongly recommended.
Posted by Grego Applegate Edwards at 10:26 AM