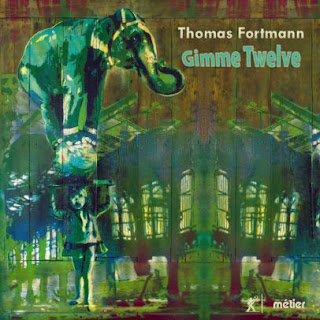 Swiss native Thomas Fortmann had a successful career as a Rock songwriter before turning away to New Music Classical composition when he was 26. He waxed prolific on this scene. A fascinating mix of his instrumental works comes our way on the recent Gimme Twelve (Metier MSV 28598). FYI see also his chamber compilation In Dust We Trust that I covered here on June 6, 2013.

The liners inform us that Fortmann's New Music is rather beyond a specific style set. I do not disagree yet at least with the seven works in the current volume I find something refreshingly Neo-Classical about it all, essentially often unabashedly tonal, very vivid, extraordinarily well constructed and inventive, well scored and well played. The sound of the music stands out as special, as much as Stravinsky does in his Neo-Classical period but happily without sounding directly like Stravinsky.

Can you detect Fortmann's Rock background in this music? Certainly you can for parts of his opening "Grafeneck 1940," as nicely performed by Accademia Amiata (violin, percussion, piano). It in parts sounds something like classic Rock "jamming" at times--not so much that you hear a conscious grafting taking place because Fortmann presents a thoughtfully Modern matrix of multiplicity throughout the twenty-some-odd minutes of  playing time.

The general album title Gimme Twelve, as the composer suggests, is a clue to the music and its chromatic orientation to all twelve tones throughout--without sounding Serialist, but more syntactically post-song.. The cover art showing a girl balancing an elephant on her head the composer notes is also a key to the musical approach, i.e., one that combines "constructive thinking and sensuous feeling," a basic dodecaphonic working method with added constructions and deviations and ultimately with results more Fortmannesque than a typical 12-tone expression from last century. There are moments of dissonance, it is true, but they are often bridges and adjoining architecture more than entities in themselves.

The distinctive character of each work (mostly small chamber ensembles) becomes apparent as you listen repeatedly. So we become more familiar and appreciative of each in time--"Burla for Elena & Greta" features the eight member Gaia Festival ensemble, "The Murder of a Buttercup" for Camerata Impuls strings and flute, "Intermezzo Estatico" for the seven member Ensemble Paul Klee, "Concertino Gregoriana"  for the seven member Interharmony Arcidosso, "Gimme Twelve" for Organist Ertoro Candela, and the final "Postlude," also for Ensemble Paul Klee.

This is music that is not necessarily the latest "fashion," or perhaps by not being that is being that? It is most of all "good music," which of course should be what we seek in the end? That and musical talent. Gimme Twelve satisfies by providing and abundance of both. I've been enjoying this album quite a bit over the last few weeks. I do recommend you dive into it if you seek something new and very good. Bravo.