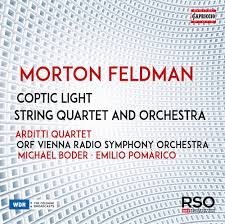 The more Morton Feldman (1926-1987) performances that become available, the more I am convinced of his central importance to the 20th Century and beyond. Take for example a recent album of two later works Coptic Light (1986) and String Quartet and Orchestra (1973) (Capriccio C5378). The music is performed with insight and intelligence by the ORF Vienna Radio Symphony Orchestra conducted by Michael Boder for the former and Emilio Pomarico for the latter, plus the fine Arditti outfit as the string quartet. The works are most definitely seminal.

The two compositions contrast well and set each other off. "String Quartet and Orchestra" is introspective and exploratory. "Coptic Light" is like a sounded dream, with repeating motifs that have an expanded harmonic horizon and are not about the repetition so much as they encapsulate a horizontal movement through a gorgeously mysterious dreamscape that stands so far ahead of what some others might have been doing in 1986 that it virtually stands alone.

The liners suggest that there was a turning point at the close of WWII and the question posed then was whether to choose between Stravinsky or Schoenberg. The US Avant School centered around John Cage--including Feldman, Christian Wolff, and Earl Brown--significantly followed neither as the liners insightfully point out, instead carving their own path, the implications of which we are still uncovering and exploring. As much as each of these composers still seems vital to our current world, Morton Feldman nevertheless stands somewhat alone as an original within the original stance, an unmistakable voice and personality within the school.

Both works are scored for a very full orchestra and Feldman's vivid sound color orchestrations take full advantage to create some extraordinary sonic landscapes.  In regard to this Feldman significantly cited Sibelius's contention that unlike the piano, the orchestra "has no pedal." Feldman went on to assert that Coptic Light creates that pedal. It does. As his last finished work it has a stunningly climactic quality in relation to the oeuvre as a whole, yet the String Quartet and Orchestra work included here makes its own case for music of an unforgettable sort, so that the two in tandem are especially rewarding.

This is some of the most beautiful "Modern" music there is out there. Do not hesitate to get this one if you want to know what that sounds like. Wonderful!
Posted by Grego Applegate Edwards at 8:28 AM