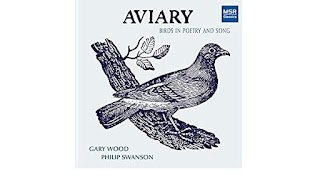 Consider a thematic album of a rather uncommon sort today--baritone vocalist Gary Wood and pianist-composer Philip Swanson perform a Swanson song cycle tied to a program of poetic texts about birds--and then they tackle some songbook and Jazz standards related to the same topic--all this on Aviary: Birds in Poetry and Song (MSR Classics MS 1730).

The Philip Swanson works form the central component and the principal attraction of the album. That part consists of 30-some-odd minutes of the totality. The cycle "Thirteen Ways of Looking at a Blackbird" features the Wallace Stevens poem grouping of the same name, set thoughtfully, tonally, with a poetic flare but not with an entirely Modern or Post-Modern typicality. At the same time the music does not hearken to a Romanticism, either. What they are is song-ful, invariably.

The two self-contained Swanson additions to the program linger in similar territory--"Great Grey Owl" with a poem by Annie Finch and "The Wild Swans at Coole" with poetics by William Butler Yeats, leave us wanting more, or at least that has been my reaction.

A Jazz-inflected mini-set follows, with emphasis on the songs, less on the "blowing" per se. So we get Horace Silver's "Peace" stated by Swanson's piano and then Wood and Swanson doing Hoagy's "Skylark" and "Baltimore Oriole," then Sherwin-Maschwitz's "A Nightingale Sang in  Berkeley Square" and closing with Tadd Dameron's "Ladybird." All of this revels in the bird theme certainly and nothing is wrong with the all of it but to me it is not as central performance-wise as the Swanson part of the program.

In the end the Philip Swanson songs are premier recordings and well worth hearing, so I do not hesitate to recommend that you listen.