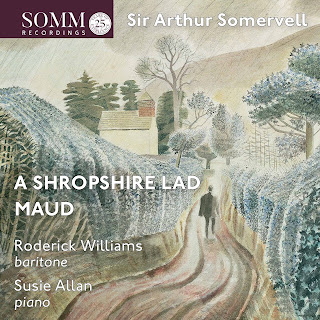 As much as I appreciate the best of the English composers from the beginnings of the 20th Century on, I cannot say that Sir Arthur Somervell (1863-1937) was among those I have known and liked. That is, until now. A new volume arrived a few weeks ago for my inspection, namely an album of Somervell songs, principally the song cycles A Shropshire Lad, and Maud (SOMM Recordings SOMMCD0615).

Baritone Roderick Williams and pianist Susie Allan present the music with great spirit and charm. They go a long ways to put the music in an ideal light, to reveal the depth of sometimes folkish invention, the expressive totality of it all.

The Art Song and its flowering in the hands of masters like Schubert, Schumann and others up until today remains one of the musical blessings of "serious" cultural byways, though of course it is still generally not in the mainstream of common listening pursuits. So these Somervell songs are not likely to become some overnight sensation out there. For those who have cultivated an appreciation of the Art Song, however, and for those who have cultivated an appreciation for the English Renaissance of Elgar, Vaughan Williams, Britten and so forth, here indeed is another voice to consider, someone you may have overlooked.

"A Kingdom By the Sea" (1901) sets Edgar Allen Poe's "Annabel Lee" (four of the six lines) and is as good a place as any to start when giving this volume a first listen.

Singer Roderick Williams devotes several pages of the liners to an appreciation. Though on first inspection, he notes,  one might identify Somervell's songs as very much of their time, even perhaps "Victoriana?" But then there is the sheer pleasure one takes in singing and hearing these songs--and indeed with the psychological complexities of Maud, something that takes it all out of the realm of conventional love songs. It's also perhaps, as he remarks, an English-speaking listener's equivalent to the high-art Lieder of the Germanic classics?

Somervell initially studied composition at Cambridge with Charles Villers Stanford who also of course famously taught Ralph Vaughan Williams and Gustav Holst. It is perhaps for that commonality with Vaughan Williams especially that hearing these songs something immediately resonated with me. There is an earthy strain I suppose you could say that perhaps both got something of from contact with Stanford? What matters is that such a tendency in part makes these songs and their complexities transcend the niceties of the time period and both point toward and participate in the English Renaissance developments of the 20th Century.

The program in the end rewards the patient listener with some very well constructed and well performed songs. This one is a sleeper. If you are already something of an Anglophile musically then I believe you will naturally gravitate towards the music. If not, it is very pleasurable fare regardless. Give it a listen by all means.