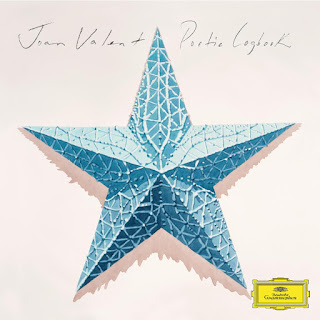 From Mallorca, Spain, composer Joan Valent is a phenom. He refuses to be categorized. At least that is so on his very beautiful album Poetic Logbook (Deutsche Grammophon). There is a second volume out, a follow-up EP  but because of  COVID-19 ongoing I was unable to get a copy. Nonetheless I did get the first volume and I am happy I did.

It is music that is very lyrical, very consonant, very rhapsodic without being typically Romantic. There is a serenading element. The series of songs for soprano Maria Planas and the chamber ARS Ensemble are based upon poetry of note. They form the central focus of the album. Then there are instrumental works that go perfectly well with the songs--Ciaccona for Violin Solo, and Four Variations for chamber configurations.

The music is Post-Minimalist in that there may be an ostinato but the music ultimately feels more linear than cyclical. It is unabashed in its striving after beauty and that puts it in a place, on the surface in a kind of polar opposite to classic Modernism, which has had historically a more duplicitous relation to beauty--as Nielsen famously said, sometimes the music should be more "characteristic" than beautiful. But then again there is an energetically expressive, brio element to be heard in the music here as well, for example on "De Sentir" or with a sort of post-Bachian motor-impulsive cello on "Porto Amico."

This is music to savor, well performed, ravishing. Soprano Maria Planas and the ARS Ensemble sound wonderfully well  The music swims in summer whirlpools, settles into winter drifts, falling leaves and rises among spring budding. It's all nice and probably appealing to many ears, I would think. Bravo!
Posted by Grego Applegate Edwards at 10:01 AM