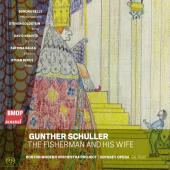 The late Gunther Schuller (1925-2015) was enormously influential on the American musical scene as I grew up. He was a Modern composer of great breadth and originality, one of the main forces behind so-called Third Stream Music which sought to meld Classical and Jazz, a major innovator in music education in his leading role at the New England Conservatory, and a musicologist and author of great consequence, writing among other things the classic Early Jazz.

In spite of all that his own compositional output has not in the present day been getting the exposure it deserves. A worthy exception is the new Boston Modern Orchestra Project/Odyssey Opera recording of The Fisherman and His Wife (BMOP/sound 1070), Gil Rose conducting.

The opera was completed in 1970 and was performed as recently as 2015 by BMOP/Odyssey in a memorial concert. The libretto enshrines John Updike's wry adaptation of the classic Grimm Brothers tale of the same name, about a fisherman who catches an enchanted prince in the form of a talking fish and subsequently intervenes for his wife who asks the fish to grant her a sequence of increasingly demanding wishes.

The point of it all is the ingenuity of the combination & contrast of the music with the libretto and the implications, the complexities of the score and its diffuse pointing beyond. The cast of  five singers (Sondra Kelly, Steven Goldstein, David Kravitz, Katrina Galka and Ethan Depuy) each take on their roles well and the orchestra sounds excellent as always.

The beautifully involved expression of orchestra and vocalists has an original Modernity and definite traces of Jazz soundings in an inimitable way. The orchestration has subtle brilliance, power and chromatic heft. Each scene has like a modern abstract painting a surface and a depth that becomes more apparent and revealing the more one is exposed.

It's a good one for your collection of Modern US milestones, if you like to gather such things together for your reference and enjoyment. Viva Gunther Schuller!


Posted by Grego Applegate Edwards at 9:31 AM