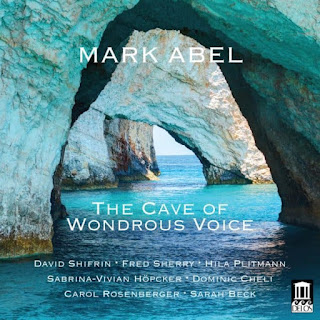 I've covered the music of Mark Abel on these pages before (see articles from April 13, 2012, June 13, 2014, August 20, 2018). I never consciously sought to cover so many. It was one-at-a-time and I've found myself liking and posting on each. Now there is another one, a new one of chamber works, entitled The Cave of Wondrous Voice (Delos DE3570). It features a song cycle and three instrumental works for small chamber configurations.

Generally speaking this is not music that overtly seeks to call attention to itself by being extroverted-Modern or Avant Garde, nor is there a rock or pop influence in any obvious sense. Nonetheless it is inspired and very well put-together music that would not be mistaken for the music of the past nor perhaps as the music of some future utopia, either? It is straightforwardly intricate, expressive and inventive in good ways, in the best ways.

The first and last works are notable for their evocative and effective usage of the clarinet (David Shifrin)--"Intuition's Dance" for clarinet and piano (with Carol Rosenberger) and the "Clarinet Trio" adding Fred Sherry on cello.

Finally a two-part "The Elastic Hours" pulls together violinist Sabrina-Vivian Hopcker with pianist Dominic Cheli for some of the most appealingly dynamic and alternately energetic music on the album.

What impresses consistently on this program is the beautiful melodic-harmonic poise of it all. One is reminded somewhat of a present-day Bartok in that the music creates an unforced and refreshing stream of inventive form-in-motion like the great Bela's music did so consistently. There is a continual series of musical acrobatics that neither relies upon the expected nor flavor-of-the-month bandwagoneering. That may mean that Mark Abel does not get a lot of attention for being on some cutting edge. The positive side of that is that the music always sounds lucid and relevant and by so doing should attract a wide variety of listeners.

This is rather brilliant written music that is well played. It will appeal to anyone who loves the intimate, "serious" sort of chamber music that speaks directly to the connoisseur of such things. An excellent program. Bravo!
Posted by Grego Applegate Edwards at 10:09 AM