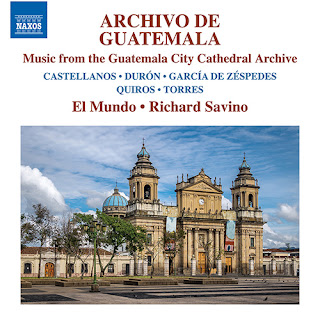 We traverse through life, those of us who are musically inclined, and cross paths with all kinds of music, if we are lucky enough to stand at various musical crossroads. Today I have an example illuminating to those of us not familiar with early Classical music from Central America. The album is Archivo de Guatemala, Music from the Guatemala City Cathedral Archive (Naxos 8.574295). The music is nicely performed by El Mundo under the direction of Richard Savino.

The 17 relatively brief works gather together multiple strands of the musical lifeways of Guatemala City in the 17th and 18th centuries. Richard Savino has arranged each piece as needed and directs the proceedings. El Mundo consists of two sopranos, a tenor and a bass vocalist, along with the combined instrumental forces of two violins, cello or viola da gamba, percussion, three or four artists alternating on (depending on the piece) Baroque guitar, early Classical guitar, theorbo, and/or lute, then there is a harpist and a harpsichordist to ground the continuo as needed.

Whether the music has a sacred or secular function does not negate the very strong combined influences of local, Spanish and diaspora African folk music, of the alternately strong or otherwise somewhat more subtle influences of  folk dance rhythms. Ensembles differ with every piece, from solo guitar to larger chamber group.

The performers give it their all and that is quite a good bit for sure. The music is lively and striking, moving, rather inimitable at times, not quite like anything I have heard, other times you feel the Spanish or folk elements in less of a hybrid mixture. Either way this is fun, memorable, very worth hearing repeatedly. Bravo!

Posted by Grego Applegate Edwards at 10:02 AM