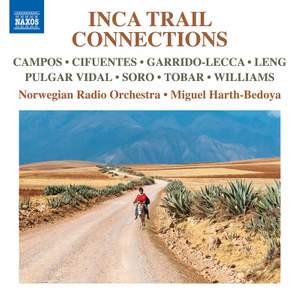 Never think that you know all there is to know about something more or less finite--like, say, South American orchestral music of the 20th century. Here comes along a volume of works centered around Peru called Inca Trail Connections (Naxos 8.574266). It features quite respectable performances by the Norwegian Radio Orchestra under Miguel Harth-Bedoya. The title refers to the Caminos del Inca, an ancient roadway that has served over time to connect lands and peoples in the Peruvian region.

The album showcases some eight works from this past century, not precisely doctrinaire Nationalistic but not not either--in other words there are strong folkloric-folk elements as well as local pop influences. a shade of Later Romanticism but then a marked descriptive quality, with attention to orchestration and expressivity that may recall a little Stravinsky or Villa-Lobos, maybe a hint of Chavez. not exactly going out of the way to build an overt Modernism but then unmistakably of the last century (or the very end of the century before) once you listen closely.

There is simply too much music to try and describe each. They taken altogether give us a rather varied but interrelated draught of Peruvian expression. It may not upset the apple-cart of contemporary music, but it is thoroughly enjoyable regardless. I recommend it for those willing to consider some interesting orchestral music we might otherwise not get a chance to hear. Listen!

Posted by Grego Applegate Edwards at 10:41 AM