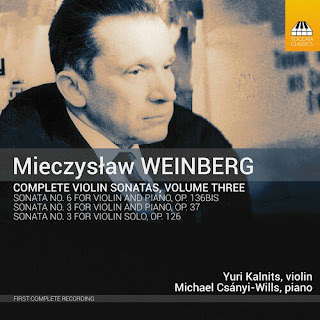 Mieczyslaw Weinberg (1919-1996) has become after his death regarded as a major 20th century compositional voice. There are reasons of course why he got proper recognition only in this century and there is no need to explore that here. The main thrust of it all is our ability to be exposed to his music in a major way now. A great example of that is the recording of his Complete Violin Sonatas, of which we now have a Volume Three (Toccata Classics TOCC 0096).

Yuri Kalnits gives us a committed, dynamic and wonderfully expressive performance on violin throughout. Michael Csanyi-Wills compliments Kalnits nicely on piano, making a poetic twosome that I suspect the composer would be very happy about.

The opening Sonata No. 3 (1947) has marvelous depth, bitter-sweet, tart modern presence and a glorious sense of opening onto our musical perceptions. There is endless melodic-harmonic movement that Weinberg has in common with Prokofiev and Shostakovich, and yet by this point (1947) he has his own way of unfolding it all.

The Sonata No. 3 for Violin Solo (1979) has dramatic torque and a finely exploratory resonance that gives us a leaner, more abstract projecting than the earlier work perhaps. It is fascinating and deep in its wholeness and Kalnits defines and realizes it with a grand flourish one appreciates.

The program is topped off  with the rather late (1982) Sonata No. 6 for Violin and Piano, which brings an expanded sense of space and time, a kind of meditative side more apparent and striking in how it all lays out.

After listening a good bit I must say that this volume in my view gives us some further aspects of Weinberg that help round out a portrait of him in chamber music form.

If you do a "Weinberg" search on the left-hand corner of this page you can find other related reviews I've done here. The Volume Three of the sonatas after living with for a week or so seems to me well worth your efforts to hear--for it gives us some gems of the later period and the performances are world-class. Very recommended.

Posted by Grego Applegate Edwards at 10:50 AM