Lincoln Trio, Trios from the City of Big Shoulders, The Music of Ernst Bacon and Leo Sowerby 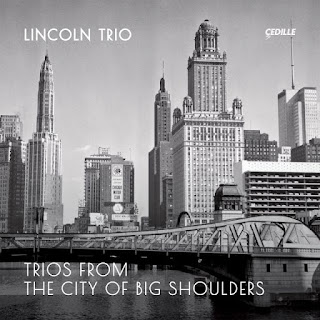 I had a friend, and may he rest in peace, who so compulsively collected audio music items (LPs and CDs) that it seemed he sometimes took on an adverse reaction to anything he did not already know--as a kind of defense against the insanity of everything-by-everybody accumulation. The fact of course is that music never stops, that there are always new things or old things discovered anew and it simply wont do to "close the books" on everything else. One still needs to pick and choose, but not by refusing everything you do not already know.

A very good example of something that many if not most of us have not paid much attention to and a recent release reminds us that we should--it is the Lincoln Trio and their CD Trios from the City of Big Shoulders (Cedille CDR 90000 203). They refer to Chicago, specifically in the 20th century.

The composers in question are what we might call Early Moderns but decidedly not your typical ones, namely Ernst Bacon (1898-1990) and Leo Sowerby (1895-1968). From Bacon we get the "Trio No. 2 for Violin, Cello and Piano" in its World Premiere Recording. From Sowerby there is the "Trio for violin, violoncello and  pianoforte" (H312). The Bacon work is a later one, from 1987; the Sowerby hails from 1953. Both works are little known, even if perhaps Sowerby the composer is not entirely obscure to us as such. And happily this release marks Cedille's inaugural offering in their several disk series "Summer of Sowerby." Had I not been listening to this first, I might scarcely have noticed such a thing. But this album stands out! And it makes me want to hear more Sowerby.

A word on the style complex the two works have in common: They are both rich in melodic zest, expressionist on the edge of Romanticism but further afield to the Modern in their arcs of harmonic-melodic movement, winding and labyrinthian. The Bacon is on a par with the Sowerby. Both have a dynamic and moving dramatics, with the sort of unfolding edginess of Hindemith perhaps, but perhaps also a slightly more overt nod to a sort of local rootedness, not obvious but at hand in the shadows so to speak.

The Lincoln Trio approaches but works with an elan, a zeal, a sympathy that lets us travel into an emphatic then contemplative opening outwards. Kudos to the Trio and their commitment to unveil lesser known or brand new works with attention to Chicago composers. They work together most impressively, violinist Desiree Ruhstrat, celloist David Cunliffe and pianist Marta Aznavoorian.

If you are up for something well composed and well played. something from the recent past yet unmistakably belonging to that time, grab this and I think you'll find it worthwhile. It will be out June 11th. Preorder at Presto Music.