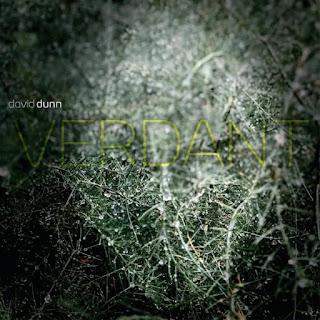 In New Music there are times when a good conceptual idea and a careful working out of it are exactly what's needed to carry the day. Such is the experience of listening to the nearly 80 minute Verdant (Neuma 129) a singular Electronic Music work by David Dunn.

The remarable thing about this work first off is that it fills an entire CD with the one continuous work, yet it manages to create a musical landscape one does not tire of. That is at least in part because Dunn deliberately stays in a place that endlessly unfolds without in any way demanding by its musical implications to move on to a part B, a part C, etc.

The central fulcrum point of the work is a contrapuntal. slowly unwinding, mostly diatonic melodic endlessness for multipart electronic tones  that are just random enough never to repeat exactly yet for all that seem vitally, musically authentic. There are also enough non-diatonic, non-stepwise tones in the mix that it expands the possibilities considerably. This central part of the music sounds quite beautiful as you contemplate it.

It is added to by  some ambient natural sounds, little bells, tinkling chimes, bird calls, a kind of feeling of musical daylight. Those sounds are continually, gradually changing, evolving against the continual contrapuntal and harmonic movement-in-stasis.

The composer in the accompanying liner notes helps us further situate the music. He interestingly notes the affinity of the music with "the idyllic and elegaic affect sought by the English Pastoral composers after the violence of World War I." He ties the idea into a "self-therapeutic" intent in response to the dark days of 2020, to create the musical equivalent to a striving after a more hopeful future. Well I concur that the music does indeed come across in such a way.

The composer gives us a detailed view of the overall musical structure of the work by dividing it into four categories. The first three center around the tonal totality. So there are "very slowly changing" sinewave drones, middle duration pitches played by two electric violins, and then arpeggiated sine tone melodies.

The accompanying ambiant backdrop I note above is actually high resolution field recordings of the composer's backyard in Santa Fe on Easter Sunday 2020.

All that makes sense mainly because of course the whole thing sounds very pastoral-positive. It is a joy to hear if you give it time to unfold.

This is perhaps not for somebody who wants continual change in their music. On the other hand it is not Minimalist per se as the composer notes. I do recommend this one strongly if it sounds like something you'll like. It is a healthy kind of music, something to bounce back from things, with things. Listen!