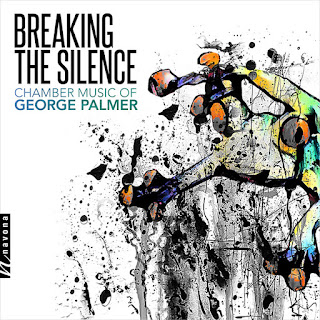 The liners tell us he has composed since his teenage days, studying it avidly and finding his voice at the same time as he studied and practiced law, gaining prominence as a Judge of the Supreme Court of New South Wales 2001-2011. Since then he has retired and now devotes himself to composition full-time.

Listening to the four works on this program one feels his Modernity as well as the pull of lyrical tonality. The music drives out of Romanticism to a fluid place where long melodic arcs and vivid passagework combine for a music less derivative and more personal than one might come to expect these days. It is all more Neo-Classical and Post-Post-Modern than not, with a naturally direct way about it that is refreshing and quite enjoyable once one sweeps aside any pre-conceptual expectations. There is a hint of Impressionism too now and again, originally so.

The program sequencing divides more or less in two, the first two works being concerted or semi-concerted with a string or chamber orchestra backdrop. The second two works have chamber group typicality with the string quartet "Not Going Quietly" and the oboe-piano "Time Out."

The performances are first-rate while each work has its own special quality.

"Breaking the Silence," his Concerto for Cello and Chamber Orchestra, and its three movement episodic layout has some gorgeous and very effective interplay between soloist and orchestra. It is jaunty at times, then plaintive, then soaringely outgoing in ways that twist and turn unexpectedly.  It is an auspicious opening, fully worthy of your effort to get to know it all

"Ithaca" for clarinet and string trio is haunting in its three movement incisiveness.

"Time Out" for oboe and piano has a placid lyricism and a bit of a Jazz inflection at times. There is something vaguely Satie-an in its pellucid charm. It gives off a natural vibe as evidenced by its movement headings: "Sunset," "First Light, Briefly" and "2AM". It is a fittingly beautiful end to a beautiful program.

Palmer's alternate career in law has perhaps allowed him to compose as he pleases, beyond the schools of Modernism out there since early last century. This is not Avant Garde but then it is not as Neo-whatever as one might expect to encounter either,  given the parameters.

I am glad this volume is out and that I have it. If you do not know what to expect next this is part of that unexpected element. It is very musical. That is what natters. Give a serious listen!

Posted by Grego Applegate Edwards at 9:53 AM