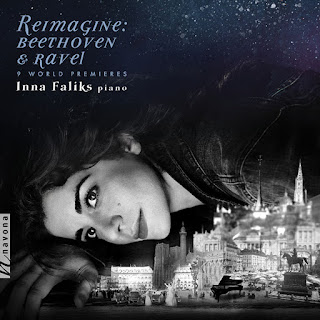 One of the ways the legacy of Classical composer titans lives on is through works written later as a homage to the master, so to speak, either in a general sense, or less often as deliberately modelling and extending a specific work. Pianist Inna Faliks gives us a volume of piano music devoted to later day Modern compositions each responding to an earlier piano work. The title gives us the plan--Reimagine: Beethoven and Ravel (Navona NV6352).

On this absorbing and deeply pianoforte-centered program we have some nine world premiere compositions specifically written for Ms. Faliks.

For the Beethoven segment there are some six original works, each modelled after one of Beethoven's six Bagatelles, opus 126. Quite sensibly and fascinatingly, each new work is presented followed by the Beethoven Bagatelle in question. So we hear in this way pieces expressly responding to a Bagatelle, one apiece by Richard Danielpour,  Peter Golub, Tamir Hendelman, David Lefkowitz, Mark Carlson, and Ian Krause.

Following on the heels of this lovely coupling are three works responding to a separate movement each from Ravel's "Gaspard de la Nuit"--by Paola Prestini, Timo Andres and Billy Childs.

All the homages extend the legacy, bring it into a piano-centered present day and thereby give pianist Faliks a lengthy set of tone poems and active excitement that shows off her beautiful interpretive skills and brings us to the edge of our seats--or perhaps rather our piano benches! Inna Faliks gives us a substantial program that shows her spectacular touch and immaculate phrasing. The music remains in the mind even after just a few listens for its haunting luminescence.

This album should please a wide range of listeners, including of course those New Music enthusiasts who are up for a Modernity that responds to the Classical legacy as it steps forward into the future. Molto bravo!

Posted by Grego Applegate Edwards at 10:42 AM