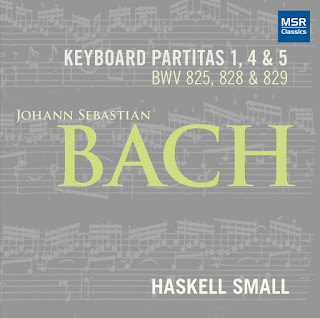 Live a virtual lifetime of music appreciation and one can look back and trace a progression of gradual coming-to-know enlightenment. So for example when I moved to Hyde Park in Chicago in 1981 I knew the Bach Partitas as part of an old Vox Box, performed on harpsichord with period faithfulness, not spectacular but lovely for the music of course.

My neighborhood in Chi-town had a great used record store and one day I found there a very old Remington LP of Jorge Demus doing several of the Partitas on piano. The darned record skipped but it was a revelation. Demus really convinced in his ultra-pianistic reading. Here was a music that translated especially well to a creative piano outlook. But that became clear to me only when I heard a real world-class pianist interpret it.

A bit later and I in time came to appreciate Glenn Gould's readings of the Partitas, but the Demus dynamic and slight rubato, the variations in touch and expression lived on as a model I found quite compelling, as much as the Gould had its very own sublimities. Both are good to know.

Years have gone by, I eventually found a skip-free copy of the Demus, but then just now I received a new CD in the mail of one Haskell Small playing on piano the Keyboard Partitas 1, 4 & 5 (MSR Classics MS 1717(). The name vaguely rang a bell. In fact I checked and realized that I had covered him playing nicely a modern set of piano compositions--in a review posting of. October 24, 2016. That is I posted happily on his Book of Hours album then.

Of course one can handle adroitly and thrive at performing Contemporary Modern piano music and it does not mean one could do quite the same with Bach. But Haskell Small's new CD shows us he has a wonderful feel for the Partitas, a sure pianistic sense of the ways to translate Bach's brilliance to piano performance practice. So he can take a long contrapuntal passage and vary the articulation of each note in sequence, vary the tempo just enough that it does not sound robotic but not so much that he sounds "clever." He trills just enough to remind us of the lineage. He expresses the tenderness of the music when called for, not so much sounding Romantic as letting show a somewhat tempered feelingfulness, just right, not to interrupt the flow so much as to add to it another dimension that of course the piano in the right hands does so well.

As much as I love the Partitas I must say Small's readings of 1, 4 & 5 give me the more to love by a real pianistic sympathy born not out of a spectacular approach, rather a subtle one You do not come away from the recording being impressed in the obvious sense with astonishment, with the velocity or other showmanship one might come to expect after Gould's readings. Instead there is a total musicality about it all, a deep dedication to making this wonderful music sound. And sure, there is nevertheless no lack of technique, velocity, melodic contour, etc., all in service to Small's vision of each movement, which is foremost. In the process Small gives us a kind of lyricization of the music, a making poignant, which the piano of course can do and Small knows how to realize it.

In the end Maestro Small adds to our appreciation with a command performance. If you have a little Demus, a little Gould, fine. But even if you do not this is a wonderful version that you should seriously consider if you love Bach and love too the piano! Hoorah! The is another volume out that I suspect deserves our attention as well.