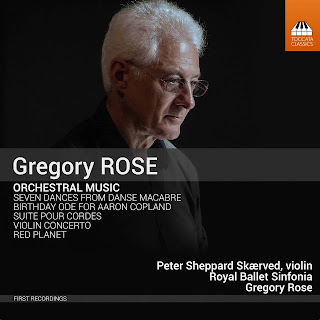 It is true in the realms of music that knowledge draws us ever-closer to the deepest understandings of the inner workings of the art, provided we concentrate and allow it all to get onto our bio-musical pathways. Such is true for the music of Gregory Rose, living British composer of note, and his Orchestra Music (Toccata Classics 0558), his recent volume as recorded by the composer conducting the Royal Ballet Sinfonia.

The five works cover a period from 1990 through to 2019, a rather bold collection of orchestral Modernity as Rose so lucidly portrays it.

The opening 1990 "Birthday Ode for Aaron Copland" has a short, compact duration of four minutes but by its multi-voiced separately orbiting motifs has great power!

There is the mystery of "Red Planet" and it's post-Holstian, post-Varesian depictive orchestral  (2014, rev. 2019) immediacy with rhythmic thrusts that call out expressively in a logical narrative unfolding of inventive orchestral sound.

The "Violin Concerto" (2017) centers around a brilliant frisson between solo violin and orchestra, with strident exclamations and marked aural spectacularizing gestures both exciting and deeply complex, with contrastingly contemplative rejoiners that give pause and set up the listener for dynamic narrations to come. It is a capital /M/ High Modern tour de force that needs to be heard and explored as it is in this fine performance with soloist Peter Sheppard Skaerved taking on the Promethean role with heroic fervor and poetic grace. It is a concerto that deserves to be more widely performed, surely.

Next up, the "Suite pour Cordes" (2017) bursts forward with appealingly strident outburst- of expression and subsequent top spinning rhythmic endlessness and intensity.

The concluding "Seven Dances from Danse macabre" (2011) has an extended "primitive" feeling at times, a more sophisticated dance feel others.  Memorable form is sustained nicely and rhythmically throughout the whole of this music. The full work for vocal soloists, choir and orchestra was released on another Toccata Classics CD (see my coverage of it for the April 26, 2021 posting). These dance excerpts nicely put a lively cap on the program and leave us wanting more.

In the end this is a very attractive, exciting volume of what Rose is up to. It confirms him as a 21st century original with a lot to say and a sure sense of how to get the orchestra to say it.