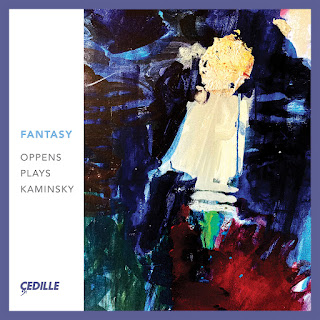 I have admired the piano virtuosity of Ursula Oppens for some time now. So it was a given for me to pay attention when in the mail I found a copy of her recent CD Fantasy: Oppens Plays Kaminsky (Cedille 90000 202). I was glad to hear it. And it turns out after multiple listens I am still quite happy about it.

Laura Kaminsky (b. 1956) has not been on my radar until now. It turns out that she writes abundantly inventive, expressionistically poised music that is neither at the edge of tonality, nor is it completely tonal-centric. It is well phrased, somewhat spicy, moody fare. It is the sort of music that improves as you listen again and again. And stylistically it is as thoughtfully beyond as any camp of New Music per se.If there are folk and mesmeric primal tonal intervallic modes, there is also dissonance and everything manages to convey a new musical sensibility in its own way.

Ms. Oppens excels in her readings of the music, from the solo intricacies of "Fantasy," to the piano four-hand maze-like animated yet introspective density of "Reckoning: Five Minatures for America" with Jerome Lowenthal. Then there are the twists and turns of the Piano Quartet (with the Cassatt String Quartet) and the formidable and expressively triumphant  "Piano Concerto" with the Arizona State University Orchestra under Jeffery Meyer. The abstract linear flow of the piano part is an amazing thing to experience, happily. And the orchestra part bolsters and carries forward the momentum in a rather profound way.

In short we come away from this with a definitely complex and pleasurable feeling for Ms. Kaminsky's music. This is not a monolithic, single-sounded sameness that we can sometimes get nowadays.  On the contrary it is delightfully plural and open, fearless of expanded tonality or primal intervallic magic alike.

All of this music and its inspired performance totals up to an album that establishes new and stylistically worthwhile territory for a furthering of the Modern project. This is in no way a mechanical step forward as it is a nicely, directly active creative articulation that stands on its own as singular.

It is all a very good addition to the music of today. Oppens comes through and everybody puts in a remarkably consistent showing of it all. It makes me want to hear more of Laura Kaminsky, for sure. Bravo Ms. Oppens for giving us this music with, as always, the brilliance she brings to our music world. Recommended for all those who wax pianistic and modernistic. This is a substantial listen.

Posted by Grego Applegate Edwards at 9:35 AM