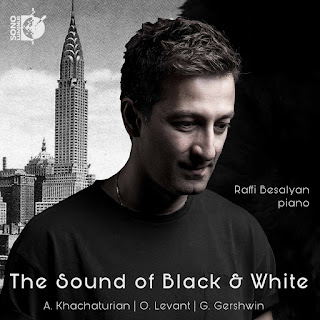 An album of piano music is a matter of diverse elements, always. The composer(s), the works and how they set each other off, the period of music and/or social-cultural history and how that illuminates the program perhaps, and of course the pianist. In today's example we get an extraordinary pianist playing repertoire for which he seems especially suited. Raffi Besalyan bursts forward and literally crackles with energy (to mix a metaphor) on his latest, The Sound of Black and White (Sono Luminus  DSL-2249).

The title implies some kind of period artsiness, perhaps a noir attitude. That is not so far fetched an assertion with the George Gershwin, the Earl Wild and the Oscar Levant kind of Jazzy Modernism, perhaps somewhat less true of the Aram Khatchaturian pieces, but on the other hand they all in their own ways typify a sort of bracing view of the 20th century, a kind of rooted pre-technicolor period? Perhaps.

What counts is that the sequence of works fit together in their own way, that they make often enough considerable technical demands on the performer and Raffi Besalyan rises to the occasion wonderfully well.

All have a kind of specially buoyant Late Romantic-meets-Modern expressionist dash, with Khatchaturian having understadanbly his own rootedness in Armenian and Russian rhapsodic poignancy in contrast to Gershwin, Wild and Levant's pronounced American Jazzed Populism.

All have a pronounced melodic vibrancy, each in its own way, with the ghostly presence of Stravinsky lurking in the wings? In subtle ways perhaps, or perhaps as a kind of convergence going forward, a synchrony of performativity and bold pianism. And then too it all makes sense as Wild and Levant were champions of Gershwin and Levant of Khachaturian as acclaimed pianists of their day, and then too both composers compositions fit in with and further that stylistic complex we associate with Grshwin.

The Khachaturian works connect together as busy and dynamic vehicles for a driving virtuosity that Besalyan seems born to. So we happily revel in the Waltz from the "Masquerade Suite," the very Armenian sounding Adagio from the ballet "Spartacus," the excitement of his three movement "Sonatina," the tender Armenian oriented Lullaby from "Gayane" and the tempestuous "Sabre Dance" as arranged nicely by Levant for solo piano.

The Oscar Levant and Earl Wild works are gems, not as often heard as they should be. The Levant Sonatina is playful, firey and dynamic. Besalyan plays it with real sympathy, rhythmic drive and Modern snap. Equally exciting is the Wild "Four Etudes on Gershwin Songs," reminding us that Gershwin in his most infectous songs was coming at Jazz in his own right and Wild puts that forward ever more pronouncedly in a Modern Classical zone here, though the superarpeggiated aspects point to a furtherance of piano Jazz tied to a Romantic origin yet bubbling over with heated energy.

Gershwin's plaintive and noir-ish "Three Preludes for Piano" fits perfelctly in the sequence and gets an excellent interpretation.

The original piano only version of "Rhapsody in Blue" heard here seems all the more Modern and Jazz-laced in this performance, a marvel and in many ways less a period piece than the standard orchestrated version.

Repeated hearings confirms the importance of this album. Besalyan is an ideal vehicle for this music, in many ways setting or furthering a benchmark for the various works. Bravo!