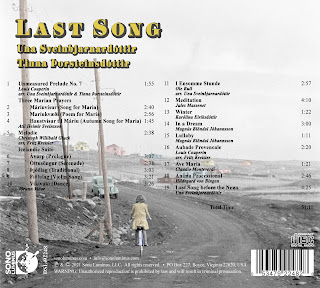 As a reviewer there are some albums that come to me and I cannot easily gauge what they will be until I listen. That was the case with Icelandic composer-violinist Una Sveinbjarnardottir and her Last Song (Sono Luminus DSL-92248).

It consists of a wisely diverse set of works for violin and piano with a good sampling of Icelandic composers plus interesting arrangements and/or interpretations of music early through the beginning of last century.

We hear in Sveinbjarnardottir a violinist with a special sound, very sweet and expressive but not precisely like Heifetz sweet. There is a burnished, wood-metal clarity that sets her playing apart as she applies her ultra-musical interpretive skills to each piece for a result that is delightful, that stands out. At the same time pianist Tinna Porsteinsdottir makes an expressively perfect , very well matched duo partner throughout.

Una's title composition "Last Song Before the News" has depth and mystery and serves to top off the program in a most appealing and memorable way. The prepared piano plays against a rhapsodic violin line and it all sounds great!

All the ins and the outs of the program serve to increase our initial recognition of the wonder of the vibrancy of Una and Tianna's rather glorious synergy and ravishing sound.

The overall thrust of the chosen repertoire reflects the artistry of the duo and shows it off well. I will not try and give a detailed, blow-by-blow description.

Una's "Last Song Before the News" alludes to Icelandic Radio Ras who plays an Icelandic lullaby, love song or ode to nature just before the news each time according to the station's plan. It suggested to Una "apocalyptic visions" of what that news might bring. The works leading to her final piece were meant to suggest a wide ranging period, each work representing a momentary clarity before a great change, a place between nostalgia and anticipation, along with a certain yearning. Now that is a lot to take in via these words, but a thorough exposure to this program should put it all together for you. It is not precisely a post-Modern place so much as it encapsulates the now of the present and simultaneously that now as past and present, expressive depth and independent lyrical fullness, a poeticism that transcends any given style parameter.

Beyond the overriding theme, the music chosen remains of interest along with the striking performances of it all. So first off  we get a slew of Icelandic composers of the 20th and 21st century. Whether you know any of these composers from exposure or you do not, the music has real impact. So we appreciate a suite by Jorunn Vioar, whom the composer calls the "grand lady" of Icelandic music. Then there is a pioneering counterpart, another woman with brilliance, Iceland's Karolina Eiriksdottir. Then there is Magnus Blondal Johannsson and his unusual and effective synthesis of Romantic and Modern elements, and his successor protégé Atli Heimir Sveinsson (1938-2019), Una's special mentor, friend and duo partner.

From there we have an interesting assortment of works and(re)arrangements of things that follow the theme, are "light" as they are "longing." There are works by Louis Couperin, Christoph Gluck, Ole Bull, Jules Massenet, Claudio Monteverdi and  Hildegard von Bingen.

The entire volume is unified in ways not often found. The duo soars and does perfect justice to each work. A remarkable effort I would say. Very recommended.

Posted by Grego Applegate Edwards at 9:47 AM