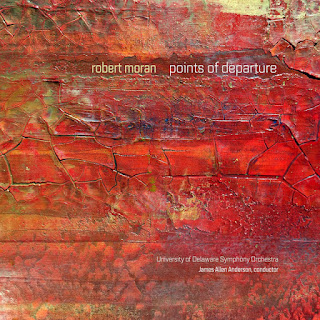 I have gladly coverd the music of Robert Moran on these pages before (type his name in the search box above), but as can be the case with relatively unfamiliar voices in the New Music, one can get something substantial from additional new releases. So is the case with the new CD of his chamber orchestra works, Points of Departure (Neuma 123).

The program covers five works in all, and each has a kind of essence of its own. This is music of the New or Radical Tonality, soundscapes, suspensions, sometimes probingly sustained, sometimes moving along in not-quite-modal fashion but not harmonically modulatory much either, yet the passagework has an almost neo-classical ratio on some parts, but not in any particularly expected way.

The entire program is sympathetically performed by the University of Delaware Orchestra conducted by James Allen Anderson. There are a very few rough-and-ready moments but they are made up for by a rather supremely comprehending approach to it all. And in the end you surely get the kind of straightforward presentation this music deserves in its brand-new mode.. Some things sound happily post-Feldmanesque in their quietude and flow, others have a very slight suggestion of Minimalism that nonetheless avoids getting stuck (so to speak) in an exclusively processual flow. Radical Tonality is a label that does not totally pin the music down but indeed helps suggest what this music does

Every work is a plant-like growth of its own, and yet the sum total is of a long expressive arc.

The title work "Point of Departure" begins the program in a throbbing and variable kind of pedal point that juxtaposes readily with the vivid colors of the tonal overlay that sets the music off.

"Angels of Silence" is a ravishing 22-minute hushed sustain diatonically tonal enough to evoke a kind pf primal quality, with enough spice-like chromatic or multi-diatonic chordal additions to contrast the endess flow with some realistic grit that happily fails to interrupt the rapturous continuity. It is exceedingly beautiful to me.

"Frammenti di un opera barocca perduta" gives us that same flowing diatonics with a Neo-Baroque unfolding and some beautiful counertenor from Daniel Bubeck. Nothing modulates so much as it makes coherence out of tonal primality.

The final "Yahrzeit" brings in basso profundo Zachary James, who continues fleshing out the fairy tale world in a somewhat different but nevertheless equally worthwhile way.

So there we have it. It is more and more captivating to me the more I hear it. A big bravo! This truly is NEW Music and so we are much the better for hearing it, I would say. Very recommended.

Posted by Grego Applegate Edwards at 10:29 AM