Apollo Chamber Players, With Malice Toward None, Globally Inspired Music 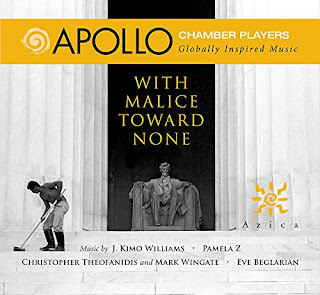 The last several review articles make for interesting comparisons, and now for a second offering in the string quartet Post and Post-Post Modern realm. (There is a third that is written and will be proofed and posted today as well.) Here we have the Apollo Chamber Players and their "Globally Inspired Music" in an album entitled With Malice Toward None (Azica  ACD71340).

One thing that can be said straight off the bat, and that is that the Apollo Chamber Players are to be warmly commended for the adventurous programming. All five works go to interesting places. We get a determined tonality and a kind of eclectic stance that appropriates music of the heritage of the vernacular, and thereby deliberately strays into places decidedly beyond the purity of purpose that bleep-bloop High Modernism has given us. They acknowledge the whole earth approach to the music in the subtitle "Globally Inspired Music." It is that, interestingly so.

This includes Euroamerican Rock elements, Western Folk and Songwriter influences, Armenian Folksongs, and finally a kind of synthesis of Eastern European, Far Eastern and American Folk elements. The Apollo and their special guests prove themselves ideally suited to the repertoire they have carefully chosen, kind of a furtherance of Kronos and the changing music soundscape.

First up is J. Kimo Williams and a take on the furtherance of riffing and rocking with the quartet and the rather psychedelic electric violin of guest Tracy Silverman, all attractively put together on the title work.

Pamela Z contributes her voice, electronics and an immersion in Joni Mitchell's classic "All I Want" among other things. I sometimes have a little difficulty with Minimal vocal repetitions but once I get past that she plays with the song in an intriguing way, then moves on to a abstract dissection of a hoary old folksong ("500 Miles") and etc. Once one gets past the vocal insistence there is some very attractive string abstractions that recall the originals yet stray into the world at large today. There is a high level of invention that helps offset the momentarily rote-ish vocal cycles.

Christopher Theofanidis and Mark Wingate begin their "What is the Word 20x2020 No. 11" (2017) with a start and stop poetry recitation composition, then derive inspiration from the spoken word with six rather beautiful movements for the quartet and the voice electronically transformed.

Matthew J. Detrick and the Apollo players do a fine job arranging for quartet (plus guest viola) Komitas & Astamazyan's "Themes of Armenian Folksongs." Anyone (like me) who loves the Armenian melodic-harmonic universe will no doubt love these as I did.

Eve Beglarian's "We Will Sing One Song" combines eastern (Armenian) percussion with strings and the duduk, a double-reed instrument also from Armenia. The music is very exciting, interesting, folk based without being directly folk-phrased. Then again the ensemble breaks after a time into a very unusual version of the Stephen Foster song "My Old Kentucky Home" and it is beautifully, wildly unexpected.

In the end there is much to like on this album once you get past some of the more repetitive vocal moments. The Apollo players are absolutely winning in their dedicated and full-blushed readings. And the music gives us some unexpected twists and happy outcomes involving the very contemporaneous sounds. Bravo, bravo!