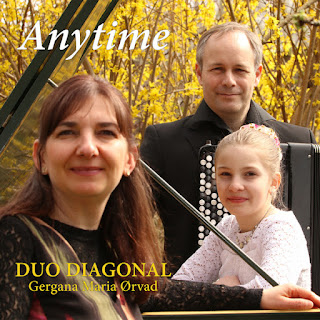 If the album up today for discussion strikes me as being "home grown," it is not because it lacks a professional element, it is that it sounds like it is a product of coming out of a kind of musical home, that the players have worked together to form an original singularity that is far beyond the sort of slick productionism that new releases sometimes end up having (which in itself is not a bad thing, just different from the direct appeal of this album). Duo Diagonal on the contrary is earthy and disarmingly centered in a musicality all its own. That is what seems important to me in considering their album Anytime (Solist Solist Foreningen Gateway Music).

What one is perhaps first struck with is the interesting instrumentation of accordion (Adam Orvad) and harpsichord (Anka Slateva) and at times the youthful vocals of Gergana Maria Orvad. The choice of repertoire for the album is quite interesting, a mix of Baroque, Modern and some Folk-rooted numbers.

The musicianship of Orvad and Zlateva have a lot to do with why this program is fascinating and worthwhile. The unusual instrumental pairing is somewhat startling in itself, but the together confluence and individually expressive talent of the two give us much to appreciate. A valuable addition to select w0rks is the youthful vocals of Gergana--on the ornate Bulgarian folk songs and Bernstein's song cycle "I Hate Music" from 1943. Both have a remarkably refreshing quality, not quite like anything else out there really. Just the Bernstein alone is very good to hear, but there is so much more in all of this.

Then the Rameau "Pieces de Clavecin" arranged for the duo has a kind of outstandingly lyrical heft to it that one might not assume would be there unless one listened. Then you listen with a happiness, something you might not quite have expected, a pleasure of an added bonus. That applies to the Baroque gems by Buxtehude and Purcell as well.

In the Modern realm the strident movement of John Frandsen's "Sisytos" has a convincing togetherness and exploratory feel that seems just right. Louis Aguirre's "Toccata" jumps out with a manic dissonance that is in the end rather a perfect vehicle for the two. The title work "Anytime" by Hanne Orvad gallops into a Modernity that pits the duo against one another in an exciting exchange. Finally Axel Borup Jorgensen's "Fur Cembalo und Akkordeon" has depth and a dynamic movement that the Duo realizes perfectly and excitingly.

In the end Anytime works because all the pieces fit together in rewarding ways--repertoire, pacing, musicianship and aural surprise. They help us savor the old and the new in ways unusually convincing. Bravo, bravo!

Posted by Grego Applegate Edwards at 11:14 AM