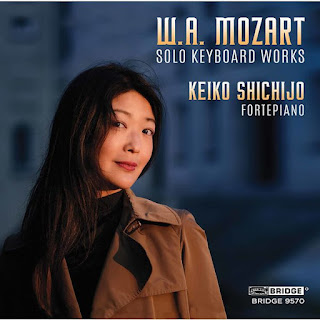 Pandemic, social turmoil, isolation, there has been nothing especially easy about life of late, at least for me. As much as ever music gets me through. Today there is a good example of a musical bridge to a happier place, namely Keiko Shichijo performing W. A. Mozart Solo Keyboard Works (Bridge 9570).

What is an important part of the remarkable nature of this album is that Ms. Shichijo performs the whole of the program on an 1802 Frere et Soeur Stein d'Augsborg a Vienne, a slightly later incarnation of the Stein models Mozart first favored beginning in 1777. Unlike modern pianofortes the instrument did not have a back check to prevent the hammer from rebounding after initially striking the strings. As a result the piano requires a technique that does not favor hard-edged attacks, but rather a more gentle overall keying which the pianist after some getting used to reportedly found remarkable in the ways one might vary the string attack and the piano's unique response. If you listen with some care you start to understand how she individualized the attacks in very interesting ways.

Listening to the program one is struck how the marvelously individual tone of the piano makes logical sense to the sound of Mozart's solo piano style. What in retrospect seems a little cold and stark in hearing modern piano versions of works like his "Fantasia in D minor, K. 307" in particular, but then too the other works heard here, is on the Stein a very different experience--with a warmth and singular fullness of sound color. The music makes a different kind of sense with the magnificent sound of the piano and Keiko Shichijo's mastery over the special beauty of the combination of soundboard and key action. The various pitches come at us together with each note remaining colorfully distinct, more so than in a typical modern period rendition, as I hear it anyway.

The program includes the aforementioned Fantasia in D minor, K.397, along with the Sonatas K. 311, K. 283, and K. 310, plus the Rondo K. 511. Every piece has a kind of revelatory quality in the pianist's hands and how she realizes the pianoforte's unique sound.

Keiko Shichijo is a true poet of the ivories. This rivals some of the best Mozart solo piano performances ever, to my mind. You owe it to yourself to hear it.

Posted by Grego Applegate Edwards at 10:30 AM