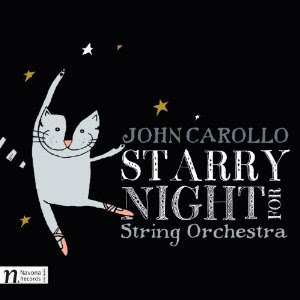 John A. Carollo is an American composer whose music has not reached my ears until now. After hearing his Starry Night For String Orchestra (Navona 5844) several times for this review, I am glad to be catching up with him. The CD features six of his works. All have something to recommend them to our ears. The first and last compositions, two pieces for string orchestra, "Starry Night" and "Nothing Shall Come of This" form a kind of musical set of bookends to the pieces in between. The orchestral piece "Anguish in Every Household" fits in with these two in that all three have something of the crusty pioneers of American modernism--Ives, Ruggles and perhaps Henry Brant--embedded in them. (And others, too.) The thought is that he roots himself in the past in order to create another possible future for American classical music.

There is mystery and wonder painted with memorable tonal expressionism. Sometimes one is reminded of the Ives of "Central Park in the Dark" and "The Unanswered Question," not in terms of imitation but a kind of building upon the legacy of those masterworks. And there is the lushly full but cragged harmonies of the early masters too.

The middle pieces, Quartet No. 1 and "Moravian Sax in the Afternoon" have some of the rustic plainess of shape-note hymns, some of the rooted qualities of the American landscape (and in this case, since Mr. Carollo is Hawaii based, a hint of tropical island open spaces), and at times a sort of puckish good humor.

The piece for concert band, "Transcendence" has some restlessly modern modulating flourishes with latent power and forward thrust.

In the end I must say that the CD has made me into a John Carollo enthusiast. He builds bridges back to what is best in the pionering avant garde of 100 years ago, incorporates what is conducive to his creative and melodic-harmonic spirit, and makes of it all something new, and very American.

This is spirited, creative new American music, well performed and well worth a listen.
Posted by Grego Applegate Edwards at 7:42 AM