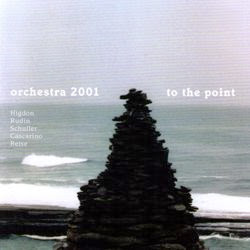 When summer heat becomes demonic my ordinarily acoustically conducive listening environment suffers greatly. Last week was such an occasion. The 100-plus-degree weather necessitated the noise of fans, air conditioners and an especially annoying blower on my computer that kicks in at a certain point and is so noisy that music listening becomes quite difficult.

The result is that though I went through the motions of hearing Orchestra 2001's To the Point (Innova 745) five times as per the usual with me, the quiet sections of the works ended up sounding like "music for blower with some kind of unidentified additions by unspecified instruments." But I am now listening again in a cooler planetary episode, so that all the lovely quietude comes through.

First things first. Orchestral 2001 is a relatively new organization, formed in 1988 by conductor and music director James Freeman. They are in residence at Swathmore College and concertize there as well as in Philadelphia venues when not touring.

They specialize in the music of the 20th and 21st centuries. There are a number of recordings out. To the Point is the first I have heard with any concentration. Five works come into play.The first is an effervescent little fugal overture by Jennifer Higdon, which forms the title to the album and frames the concert offerings in an anticipatory way.

Next up is Andrew Rudin, who I am ashamed to admit last came to my ears through his electronic piece Tragoedia, on an old Nonesuch recording from the late '60s. His "Canto di Ritorno (Concerto for Violin and Orchestra)," with Diane Monroe playing the solo part, has the sonic plaintiveness of the Berg concerto minus the tragedic expressiveness and instead with a good deal of gossamer and fairy dust for our midsummer revelries (or rather reveries, I should probably say).

Then there's the marvelous Gunther Schuller "Concerto da Camera," a very evocative work with the sort of orchestrational brilliance Mr. Schuller conjures up so well, and some more quietly playful and elegaic passages.

Romeo Cascarino's "Blades of Grass" has beautiful largo writing for strings and Dorothy Freeman on English horn. It's another meditatively quiet piece. Don't run the fan with it!

Finally there is Jay Reis's more bravura "The River Within (Concerto for Violin and Orchestra)".
Maria Bachmann takes on the solo part with admirable passion and presence. It is a more traditional sounding modern concerto it its dynamic thrust and the clarity of its orchestration, but nonetheless shares with its fellow works a kind of pastoral playful translucency at times.

In the end To the Point fully satisfies the ears with a quintet of works that have the newness of modernity but also grandly sonic post-romantic narratives of depth and colorful orchestral utterance. It is music mostly on the quiet side. It is a tribute to Maestro Freeman and Orchestra 2001, certainly a most formidable new music, new music institution.

This one deserves your undivided attention and pays off with works showcasing poetically the modern orchestra at its best. Recommended.
Posted by Grego Applegate Edwards at 4:49 AM