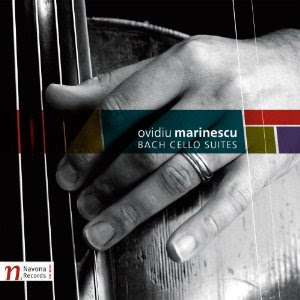 As a confirmed Bachaholic since my early teenage years, I've long felt that the best place to experience the musical mind of JS was in his Suites for Solo Cello, the Sonatas and Partitas for Solo Violin and the Well Tempered Clavier. Now this is hardly a revelation. Nevertheless it is true that the brilliant line weaving and expressive contrapuntal elementality might be said to be shown most clearly in these works. Of course for the counterpuntal simultaneity you get that mostly in the clavier series. But for the brilliantly inspired melody that Bach could whip together in an almost otherworldly fashion, the cello and violin works are virtually unsurpassed.

Of course, in the hands of a player less than brilliant, this can be a very instructive but also slightly painful experience. In a recorded world you start remembering where an intonation lapse is going to occur, when the phrasing gets sloppy, and you start to cringe.

There is no danger of that when hearing repeatedly Ovidiu Marinescu's new recording of the Six Suites for Violincello (Navona NV5840). He is a player of impeccable accuracy and considerable expressivity. All six suites fit nicely on 2 CDs, which perhaps everybody knows but me, since I still have a couple of LP sets I listen to--and then it's a matter of THREE disks.

Everyone will I hope recognize the prelude movement of the first suite (usually heard more often on the "street" as a piano version from the Well Tempered Clavier), since it seems to have taken over from Satie's Gymnopedies and Pachabel's Cannon as the pop-co-opted classical piece of the moment. I've heard it on at least two commercials, the Mentalist, and a couple of other places. Naturally it is a prelude and not really Bach unleashing his full creative forces. Nonetheless it is of course quite lovely and Marinescu does a fine job interpreting the rockingly ongoing quality of it.

But then you get beyond that for some of the finest of the small-forces Bach and Maestro Marinescu really comes into his own. This is a warm, vibrant, expressively empassioned version of the suites and it is a true joy to hear.

Plus if you put the disk on a computer you get nice extras, like a full set of scores to follow along with, a digital booklet and etc.

If you are in the market for some glorious Bach, this one comes through. It's ready-to-hand (just came out, after all) and it will brighten your space dazzlingly. Very recommended.
Posted by Grego Applegate Edwards at 5:24 AM